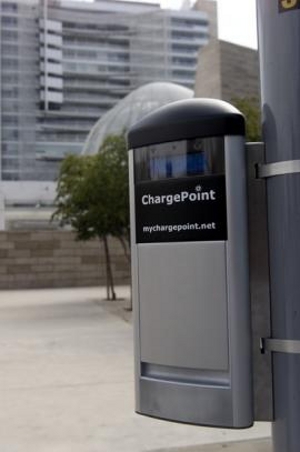 The city of birth for the Chevrolet Volt is getting ready for the car's arrival, having installed the first of 500 charging stations which will be deployed throughout the state in the months to come. The first charging points are located outside the headquarters of NextEnergy, near the Wayne State campus.

The stations are supplied by Coulomb as part of its $37 million program which will see 5,000 charging stations installed in nine regions of the US. The program is funded by the American Recovery and Reinvestment Act through the Transportation Electrification Initiative and administered by the Department of Energy.

The chargers will be free-for-use regardless of the type of car you drive (so far, Coulomb has signed partnerships for the Chevrolet Volt, Ford Transit Connect Electric, Ford Focus Electric and smart fortwo).

Even more, the charging equipment itself is free as a result of the state funding, with those who order one only having to pay an installation charge. Ordinarily, such an equipment costs $4,000 to $5,000. The in-home chargers cost $1,700 to $2,000.

“With cars like this, you’ll never go to the gas station. But you need a place to charge them,” Coulomb CEO Richard Lowenthal said at a press conference cited by Freep. “If you can’t fuel your vehicle, you won’t buy one.”

By the end of the year, the plan is to have the first 1000 new public charging stations installed, with the rest to become operational by September 2011. By 2015, the estimate is the US will need around 2 million charging stations to fulfill its needs.