Largest LNG Bunker Barge in the U.S. to be 416-Ft Long and With a 3.17M Gallons Capacity

In the late 1960s, DeTomaso revealed the stunning Mangusta, and the first question on everyone’s minds was, why on earth would you name a 300-hp car after a mongoose? It turns out that this was a subtle dig at Caroll Shelby since this animal is one of the few that can kill a cobra.

Years before deciding to create a Shelby Cobra-killing sports car, 27-year-old Argentine-born Alejandro de Tomaso emigrated to Italy in 1955 with the dream of becoming a Formula One driver. He settled in Modena, a city with deep roots in the automotive industry, and two years later, he got a chance to make his dream come true by joining Scuderia Centro Sud, a local privateer racing team.

His driving career was short-lived, but his passion for fast cars grew stronger so, in 1959, with the help of American businessman and brother-in-law Amory Haskell Jr., he founded De Tomaso Automobili intending to build thoroughbred sports cars that could rival the likes of Ferrari, Maserati, or Alfa Romeo.

After four years of arduous development, the company launched its first road-going model, the Vallelunga. It used a mid-mounted 1.5-liter Kent four-cylinder sourced from Ford Europe that the compact Cortina originally used. With a little over 100-hp on tap and weighing 1,601 lbs (726 kg), it was reportedly fun to drive but nowhere near the V8 and V12-powered supercars of the era.

As the Vallelunga was nearing its public debut, another former racing driver turned car builder name Carroll Shelby was looking to create a new Can-Am race car across the Pacific. He searched for a suitable rolling chassis since developing a new one from scratch was too expensive.

In an unlikely turn of events, he met de Tomaso and was introduced to the Vallelunga. The car’s lightweight backbone steel chassis showed a lot of promise, so Shelby contracted the Italian company to build his race car. He provided an important part of the financing and assembled a design team headed by Pete Brock, who traveled to Modena and began work on the project dubbed P70.

De Tomaso had several disagreements with Shelby and his team that ended up delaying the development process. When it became clear that the five cars required wouldn’t be ready in time for the 1965 Can-Am season, Shelby ended the partnership and focused on Ford’s GT40 project.

Renamed Sport 5000, the P70 was eventually finished with the help of Carrozzeria Ghia and was unveiled at the 1965 Turin Motor Show. It even took part in the Mugello Grand Prix a year later but retired on the opening lap.

Determined to show Carroll Shelby that he can build a terrific supercar on his own, de Tomaso instructed his engineers further to improve the P70 chassis and powertrain for road-legal use. Next, he commissioned Ghia’s Giorgetto Giugiaro to design the bodywork and topped it all off by naming the vehicle Mangusta (mongoose in Italian).

The car was finished in time for the 1966 Turin Motor Show, where it stole the spotlight from the Ferrari 365 P Berlinetta Speciale or Lamborghini Flying Star II concepts.

With its aggressive wedge-shaped lines, a low-slung roofline, and two-piece engine cover that opened like gullwing doors, the Mangusta was nothing like the supercars of the day.

Underneath the fiberglass body of this exquisite Italian masterpiece stood an American-built 4.7-liter HiPo 289 V8 originally sourced from Ford for the P70 project with the help of Carroll Shelby. The engine was fitted in a rear-mid position on the improved backbone chassis, and it was paired to a ZF five-speed transaxle with a limited-slip diferential. Rated at 306 hp, it helped the car accelerate from 0 to 60 mph (0-97 kph) in 5.9 s and reach a top speed of 155 mph (250 kph).

Apart from the powerful American engine, it came with many state-of-the-art features like disc brakes on all four wheels, an independent suspension system in all corners, rack and pinion steering, along with power windows and air conditioning.

Production kicked off in 1967 with some early examples making their way to U.S. shores. Because of the low production numbers, they were imported under federal waivers which exempted them from the safety regulations. These cars came without bumpers or seatbelts, and their headlights were way lower than what was normally deemed roadworthy.

When the waivers expired, De Tomaso released an upgraded version specifically designed for the U.S. market. It came with numerous safety improvements, including modified headlights that used a crude pop-up system to raise into the required position.

Along with later Euro-spec models, these cars were fitted with a 4.9-liter 302 Ford small-block that was limited to 230 hp to comply with stricter emission regulations. The Italian carmaker also built a one-off for General Motors vice president, Bill Mitchell which, as you would expect, was powered by a Chevy V8.

Because of its 32/68 rear-biased weight distribution and suspension configuration, it handled poorly. Moreover, the lack of interior space was also a major drawback, especially for taller occupants who could barely fit inside.

However, its timeless styling and reliable, mid-mounted Ford engines overshadowed its flaws in the eyes of many American enthusiasts who wanted something totally different than a Ferrari or a Lamborghini. In total, 401 units were produced until 1971, the majority of which were imported into the U.S.

It’s estimated that less than half of these cars survived, which makes them sought-after collectors’ items today. One in mint shape is valued well over the $300,000 mark.

The Mangusta never became the Shelby Cobra-killer envisioned by Alejandro de Tomaso but managed to make a name for itself and earn its place in the automotive history books, nonetheless. It introduced the company to the world and paved the way for the Pantera, De Tomaso’s ultimate masterpiece.

You can admire it in all its and hear the powerful 289 roars in the video below posted on YouTube by Jesse Adams. 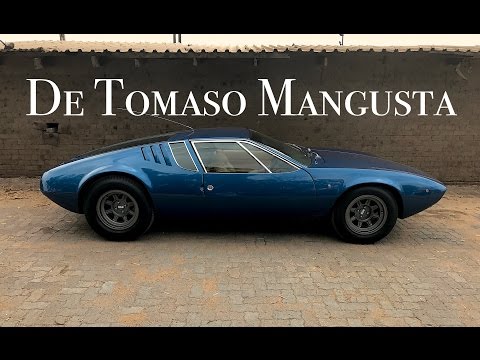