1 YouTuber Does a Valuation of His Supercar Fleet, Totals a Little Over $4.7 Million

2 This 1990 Porsche 911 Was Found Abandoned, Labeled as Junk, Now Coming Back

Rare, Supercharged Packard Hawk Has Been Sitting for Decades, Begs to Be Saved

Despite Having Thin Paint, 964 Porsche 911 Turbo Goes Through Full Detailing

Sebastian Toma
Back in the early 90s, vehicle owners who wanted to get a bit of protection for the paint of their automobiles could opt for clear paint protection film, which seemed to be a good idea at the time. Many people installed what was referred to as a "clear bra" and helped protect the front of the car from stone chips and other hazards of such.
10 photos

As we have previously seen in other detailing videos, old PPF is difficult to remove after spending over a decade in the sun. Yes, this is not a DIY job, but it does not take an expert to notice that a vehicle needs professional attention, and it is advisable to get it sooner rather than later.

Avoid attempting to remove the foil yourself, as the work requires a certain level of ability, not to mention experience. While both can grow in time, it is wise not to attempt to get them while detailing a classic Porsche.

This example of the 964-generation Porsche 911 Turbo is well cared for, though, as Larry Kosilla of AMMO NYC is handling its cleaning and detailing.

As usual, Larry walks us through the process and also explains what chemicals and tools are used, as well as why. The “why” is as important as the “what” in the case of detailing, as it is a matter of the detailer's judgment to decide what tools and chemicals are best for each area.

As Larry explains, this 964 Porsche comes with a thin layer of paint, which is just over three millimeters thick in most places. We are writing about original paint, which does need a bit of attention in the form of a one-step polish, just to name a bit of the work ahead of it.

In situations like these, the experience of the detailing specialist is crucial, as going too far with the polishing in the hope of achieving a perfect finish leads to damage. 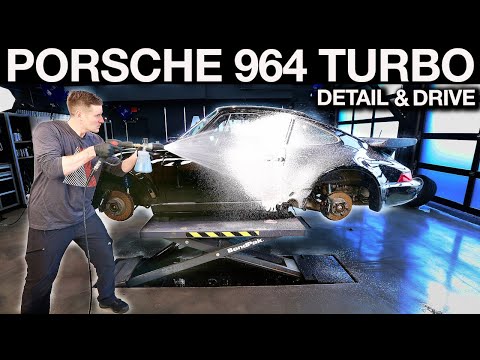