3 A One-Wheel Electric Motorcycle Is a Thing That Exists

Cristian Curmei
With so many e-bike designs hitting the market in recent years, it's hard to tell them apart anymore. One thing that helps is a brand sticker or just a downright revolutionary design.
12 photos

Ladies and gentlemen, what your eyes see is known as the SM Electric Bike. Before you go searching Google for the manufacturer’s website to place an order, don’t. Currently, this design is only a concept. Springing from the minds of Facundo Mehrbald and Hyung Suk Seo, this fresh idea could be seen on streets later this year. Ok, maybe not the whole bike, but some aspects of the technological ideas expressed could make it to the real world. And if not the technology, at least some visual aspects are sure to win over hearts.

The first noticeable feature of the SM is its frame. Through design and an understanding of the functionality, these two designers have created a frame that includes no down tube. Now, it is an e-bike, so electrical components are present, only hidden; you'll see what I mean shorty.

A lack of a down tube may not necessarily be a good idea, but this depends a lot on the type of material used in the construction. Personally, I may have chosen carbon fiber to build such a body as it offers some flexibility. However, the designers chose hydroformed aluminum to express the forms they had in mind. That isn’t a bad thing, as aluminum can be just as good for certain shapes and stress points, sometimes even better than carbon.

The second benefit of using aluminum is it allows the bike to come off rather affordable if someone decides to build this puppy. Now that we concluded the lightweight yet rigid frame can take a beating, let's look at the electrical components.

Try to guess where the battery pack may be hidden. If you answered "in the frame," you might very well be a designer. Right in front of the seat, a bulge accommodates the battery, offering easy access thanks to a seamlessly integrated hatch in the top tube.

As for the motor, that is where things get a bit odd. The designers chose to throw out conventional motor mounting and have positioned it in the rear triangle formed by the chain and seat stays. Usually, this space is reserved for derailleurs, brake mounts, and linkage. Here, all that leftover space is filled with a rather odd motor. How that dual-chain system is supposed to function, I haven’t the slightest clue. No mention is made on the designers’ Behance page either.

The rear of the SM shows that it’s a hardtail, so gravel and some light trails should be the only places you ride this baby if it ever turns into a real thing. Whatever trails you decide to take this daydream on, a front suspension is available, but there's no mention of travel. Since it’s still just a concept, there’s no point in worrying about aspects like these.

To stop this e-bike wannabe from taking things too far, a pair of classic V-brakes clamp down on what looks like a pair of aluminum tires. On the tires, there's a tread pattern like those found on gravel bikes. This assumption is further reinforced by the rider in the image gallery.

Personally, if this sort of design ever becomes a reality, I would really consider giving it a spin; why not. For now, however, the only spin it’ll take is in your mind. However, a somewhat rough scale model of this design does exist; it may only be a matter of time until people are out on an SM e-bike. 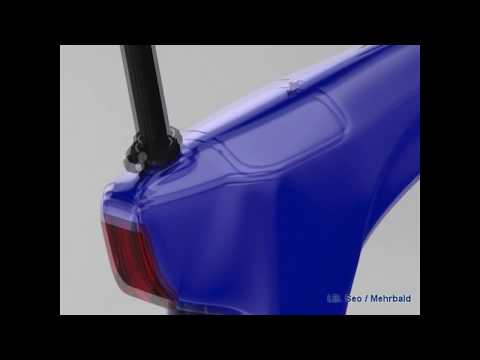