4 Google Apparently Has a DeLorean on Its Campus. Should We Be Afraid?

Vlad Mitrache
You can't say "DeLorean" without thinking of the "Back to the Future" trilogy, but the opposite is just as true. It's hard to imagine what the movie would have looked with a different car acting as the time machine or whether it would have had the same success, but luckily we don't have to.
1 photo
The silver-gray sports car that was such a flop in real life owes all of its fame to Doctor Emmett Brown and Marty McFly played by Christopher Lloyd and Michael J. Fox. The 1985 movie spawned two sequels, but contrary to the usual Hollywood habits, they were just as good as the original. In fact, they did an excellent job of closing down the story that we can breathe a huge sigh of relief nobody ever thought about milking the franchise further and making another movie.

Its success brought it a huge following of dedicated fans, people who collect all sorts of memorabilia related to the series and who know very well why October 21, 2015, was such a special date. They probably even took a day off to celebrate appropriately.

Brandon is one such fan. He has a garage full of Back to the Future stuff, and if his daughter is to be believed, there's more of it in the house too. Weirdly enough, even though he says it's his favorite character, Brandon doesn't own a DeLorean. Yet. The team of the tv show Super-Fan Builds selected Brandon to be the star of one of their episodes, which means he's going to have something Back to the Future related built for him.

With help from the guys at Set Masters (involved in the backstage of major Hollywood movies such as Iron Man or the Deadwood series), they went big and got Brandon the DeLorean he was missing. However, he didn't get in one piece. Yeah, the gullwing doors pop open and the car has been embellished to resemble the time machine, but it did suffer one vital transformation: instead of seats, it's got a massive hot tub inside.

It looks like Brandon got two great things he was missing into one: a DeLorean AND a hot tub. He said he wanted something he could use to entertain the guests during the nerd parties the throws, and that's exactly what he got. Even though he didn't seem too eager to share his new toy with anyone except his daughter and his girlfriend. 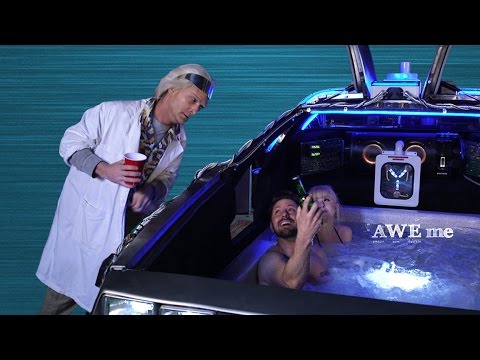