This 1963 Chevrolet Impala SS Is a Perfect 10, Flexes Original Muscle

Cristian Curmei
During the past few years, the e-bike market has a seen a nearly three-fold increase in revenue. It’s no wonder that so many teams are trying to cash in on the prize. While some produce bikes that make it to the next year, others are forgotten.
11 photos

One of the teams surfing this new-found wave is Eunorau Electric Bikes. This Las Vegas-based company has been in the e-bike industry making components for over 11 years and counting. However, it has only recently begun selling complete e-bikes. With the level of fun and power riders have experienced on previous models, it looks like this team will keep going.

That brings me to the team's newest launched wonder, the 2021 Defender S AWD full-suspension e-bike. Don’t start thinking you’ll be winning the next XC or downhill championship with it, though you’ll give other e-bikes a run for their money in the quarter-mile.

To kick things off, time to look at the frame. The Defender S is built from 6061 aluminum alloy, and unlike other e-bikes like it, this one includes a full-suspension framework that allows for 165 mm (6.5 in) of travel. A little weird for a fat-tire bike, but hey, who am I to judge. Why do I say weird? Think about it. You have a shock, a fork (which I'll get to shortly), and then those massive tires that are sure to bring their own level of suspension. How do you think that’ll feel as you hit some rocks and bumps? The rear suspension is covered by a DNM A0-42RC shock, while the front suspension features an RST Guide with 75 mm (2.95 in) of travel.

What about the electronics to move this destroyer class e-bike? As mentioned earlier, the Defender S is an AWD vehicle. That means that not one, but two Bafang 750-watt hub motors running under 48 volts, deliver a total of 1,500 watts of power. Quite a bit for an e-bike; enough to fly you around whatever terrain you have in mind at speeds of up to 35 mph (56 kph), actually. Absolutely nuts, and not even road legal in Europe.

Another trick up this bike’s sleeve is the dual battery capacity. Two Samsung 48-volt 17-amp-hour batteries will give you enough range to cover up to 80 miles (128 kilometers), depending on road conditions. Once drained, it’ll take you up to six hours to fully recharge. There’s also a 14-amp-hour setup available.

A pair of 26-inch black alloy wheels grip a pair of Kenda Sport Tires with a 4-inch diameter. These also include K-Shield protection, which have a layer of aramid and ceramic particles under the tread, helping to protect tires from punctures. Guess who else is in on this action. That's right, Shimano, but you’ll only find an Alivio 9S shifter working its magic.

As for braking, it is provided by Eunorau’s in-house hydraulic disc brakes with 180 mm (7 in) rotors on both the front and rear tire. Another feature worth mentioning is a motor cut-ff sensor hidden in the brake handles.

So, you want to get yourself one of these dream machines. Well, better act fast as the Defender S Pro is currently available on IndieGoGo for just $1,999, with only 40 units more available (at the time of writing this article). The basic Defender S is listed at $1,799, also on IndieGoGo, with delivery for both models expectied in November 2021. Once this campaign is over, the Defender will be offered for $2,899, according to the manufacturer’s website.

Personally, I'm so down to ride this beast. But you really must take into consideration this bike's limits. If you don’t, you’ll end up spending two months or so with both arms in casts, if you’re lucky. 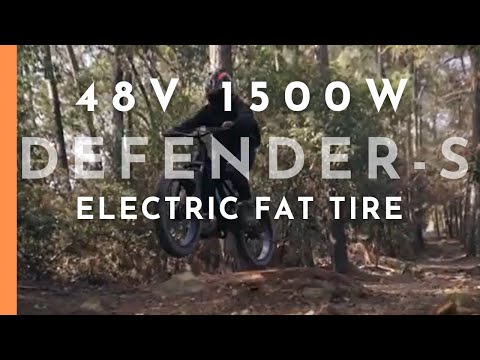