Anuel AA’s Biggest Flex: Arriving at His Team’s Basketball Game in a Chopper

When the new Land Rover Defender came out, people were quick to pit it against the Jeep Wrangler or, later on, the Ford Bronco, but the truth is those two SUVs aren't its main competitors.
12 photos

That may have been the case previously when the Defender was just a no-frills, relatively simple, and quite capable off-roader, but the new generation has veered a great distance from that. It's the apple that fell so far from the tree you'll wonder whether it was actually a hurricane that snapped it off the branch.

This makes it quite difficult to pinpoint its exact competitors and, funnily enough for Land Rover, the closest one is perhaps the company's Discovery model. However, with that nameplate currently in a pitch-black cone of shadow after the failed fifth generation, the risk of sales cannibalization is very low (mostly because the Disco 5 has almost none).

So, where does that leave the Defender? Well, in a world where SUVs focus on either off-roading capabilities or luxury – and almost never on both – the new Land Rover finds itself surrounded by very few friends to play with.

With its three locking differentials, famous ruggedness, and everything that comes with the Mercedes-Benz badge, the G-Class is probably one of the closest matches you could find. However, we've all seen by now how they fare over rugged terrain in countless comparisons, so what other way of testing these SUVs can the people behind a YouTube channel come up with?

Well, it all comes down to your surroundings. If you find yourself on a patch of rocky terrain, you can hardly think of drag racing, can you? And if it's an airfield you're on, there's no point in putting the vehicles in their highest suspension setting. Still, drag racing on runways has become so cliche, that even if you do come to an airfield, you still feel like you should come up with something else.

Question is, what? The German branch of carwow thinks pulling World War 2 bombers might be a good idea. However, it's not just about pulling the airplanes but also coming to a halt as closely to a set object as possible. It doesn't make much sense, but then again neither do half the trends on TikTok, so don't be surprised if this catches on.

Why they chose a solid object such as an oil barrel as their marker is beyond us, but the danger of hitting that thing does make the whole experience a bit more dramatic. However, watching the clip will probably leave you wondering one thing: what exactly is this relevant for (especially since they don't even have the latest G-Class)? The vehicles' braking systems? Their parking sensors? Their ability to induce confidence? The size of the driver's balls? Well, we're afraid you won't get any answers from us. 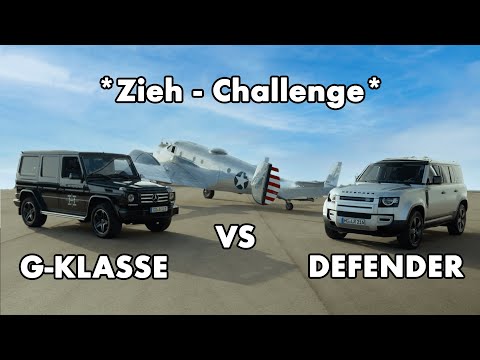