1 Deadmau5 Is Actually Getting a BAC Mono, to Be Delivered on December 12

3 Deadmau5 Reveals Photos of His New McLaren P1, Rides Segway in the Meantime

4 Deadmau5 Ordered a McLaren P1, Got a Scale Model Instead [Updated]

5 Deadmau5 Bought a New McLaren P1: on to The Next One
Car video reviews:
Up Next

Jeremy Clarkson Wants His Porsche Back from Argentina: Reports

His daily driver is a beautiful McLaren 650S Spider. Nissan has offered him a GT-R for free and sports cars maker BAC is currently working on his personalized Mono car. But Deamdau5 still can’t get over the fact that Ferrari told him to lose the Nyan Cat wrap he had on the 458 Italia.
1 photo
Canadian DJ Joel Zimmerman is crazy about cars and whenever he’s not working on a new track fans we’ll probably find him driving around town at the wheel of one of his fast cars. His collection of vehicles is constantly being updated and he's currently waiting for two jaw-dropping cars, McLaren’s hypercar, the P1, and BAC’s one-seat sportscar, the Mono.

However, it would seem it doesn’t really matter how many cars Deamdau5 buys as long as he can’t get the wrap back on his long time beloved Ferrari 458 Italia.

The Canadian DJ had this car specially wrapped with a Nyan Cat blue color earlier this year. He did it because of his vivid imagination and to get the car ready for this year’s Gumball 3000 rally. Zimmerman won the Spirit of Gumball award with his Italian exotic, so it’s no wonder there were a lot of feelings attached to the unique wrap.

However, Deadmau5 had to remove the Nyan Cat wrap off his Ferrari the moment Ferrari North America sent the Canadian a cease and desist letter to have the custom emblems removed. Ever since this happened, Joel keeps having these nostalgic moments, remembering how he used to love his car. And this is exactly what happened the other day when he posted a making-of video from the auto shop that did the wrap. 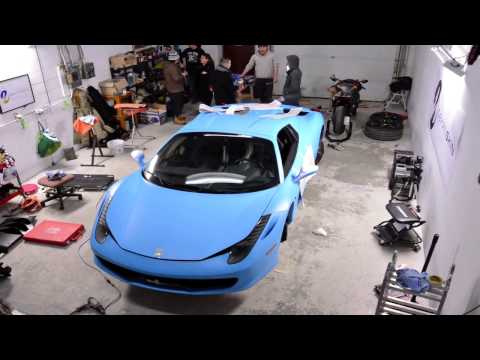