3 Audi DTM Team on the Streets of Graz

5 Webber Says Unlikely to Switch Teams
Up Next 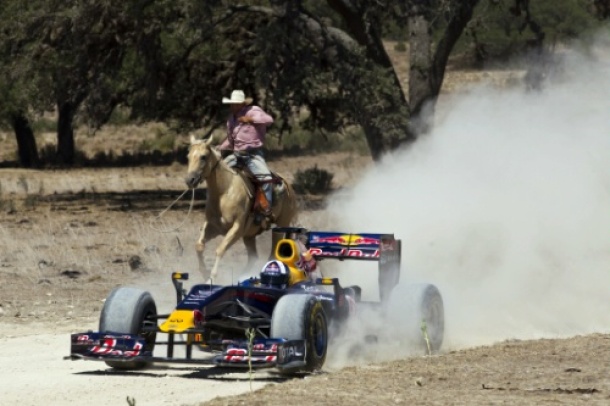 The Red Bull F1 racing team has decided to take the F1 to Texas for the weekend. Thus David Coulthard took the Red Bull Show Car off-road, it was quite a sight to see an F1 race car being chased by cowboys. As a matter of fact, you could say they were chasing the Red Bull.

Coulthard’s adventures at Circuit of the Americas and its host city Austin spanned three days. The Red Bull Racing team turned into Red Bull Ranching team pretty soon as David Coulthard managed to spin some donuts in front of the Texas State Capitol Building and become the first driver to test out the track, which is still under construction and without tarmac.

The news that Red Bull Racing were in town spread fast across the city and crowds soon gathered on Congress Avenue to watch the car do multiple runs in front of the State Capitol Building. The event also took David Coulthard and the team out for a run at a Texas Cattle ranch owned by billionaire Red McCombs, and around the GP track which is for the moment nothing but a dirt road.

It was a rare sight as it is not common to to see an F1 car go off-roading, the more on a Texas ranch.We are waiting to see what will be the record for the fastest lap of an F1 race car on a dirt track. Formula One was introduced to the home of the 2012 US GP through a whole series of events, thanks to a collaboration between Red Bull North America, the Mountain South Business Unit and red Bull racing.