1 VTOLs Are Not Even Here Yet, And DARPA Already Wants More Advanced Ones

Home > News > Military Bits & Pieces
22 Sep 2022, 20:31 UTC ·
by Ancuta Iosub
Back in March of this year, we were telling you that DARPA sent its robotic vehicles dubbed RACER, short for Robotic Autonomy in Complex Environments with Resiliency, on its very first field experiment at the National Training Center in Fort Irwin, California. This week, the agency has announced that a new series of field tests will be carried out at Camp Roberts, California.
8 photos

With one successful experiment already under their belts, the driverless combat vehicles are now getting ready to tackle rougher terrain in off-road landscapes.

The aim of these new field tests is to see how the RACER Fleet Vehicles, which are all-terrain machines based on the Polaris RZR S4 1000 Turbo, cope over rougher ground while traveling at the same (relatively high) speeds as crewed vehicles in realistic situations and if they can keep up the pace.

The Robotic Autonomy in Complex Environments with Resiliency (RACER) project is a joint effort by DARPA, Carnegie Mellon University, NASA’s Jet Propulsion Laboratory, and the University of Washington. The selected teams are tasked with developing autonomous software stacks for DARPA’s robotic systems.

“Since the first experiment, teams have been working to improve perception of the environment and planning navigable routes through development of new autonomy algorithm technologies,” he added.

During Experiment 1, 40 autonomous runs of nearly 2 miles (3.2 km) each were conducted, and the driverless combat vehicles managed to reach speeds just under 20 miles per hour (32 kph). The teams involved concluded that they needed to find solutions to improve the vehicles’ ability to identify, classify, and avoid obstacles at higher speeds.

According to DARPA, this new series of field tests, collectively named Experiment 2, is currently underway at Camp Roberts and will continue until September 27.

The production of autonomous off-road combat vehicles is an important point on DARPA’s current list of projects, as they promise many advantages for armies worldwide, especially freeing up human soldiers for more important tasks in combat. 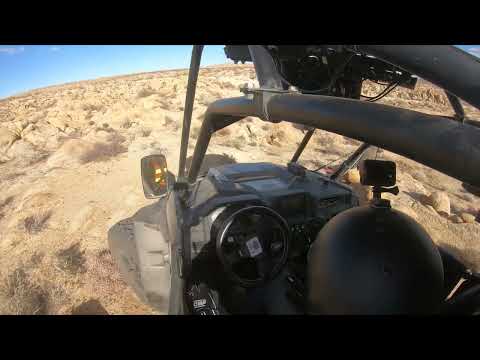