Danica Patrick Will Drive the No. 7 for JR Motorsports 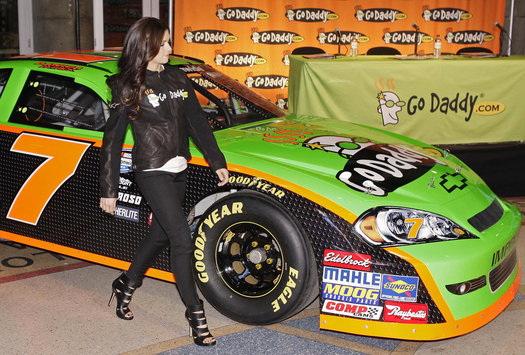 After almost half a year of speculation, IndyCar driver Danica Patrick confirmed her entry in NASCAR for a limited 2010 and 2011 Nationwide Series seasons. Patrick will be driving JR Motorsports' No. 7, based on a two year contract signed with the team.

Patrick made the announcement, as expected, yesterday, during a press conference where JRM co-owner Kelley Earnhardt and GoDaddy.com founder and CEO Bob Parsons presented the No. 7 Chevrolet which will be driven by Patrick.

The contract between Patrick and JR calls for Patrick's races to be bookended so that they don't interfere with her regular IndyCar season. Patrick will be sponsored by GoDaddy.com, while her crew will be headed by Dale Earnhardt's former Sprint Cup crew chief, Tony Eury Jr.. No word however where Patrick will make her NASCAR debut.

"I think my determination and commitment are really going to be what makes this thing go well," Patrick was quoted as saying by NASCAR. "I'm a competitive driver, and I always want to do well, and this will be absolutely no different."

"Obviously, she elevates our program and elevates the sport," Kelley Earnhardt continued. "It's going to have some different eyeballs on JR Motorsports, in a good way. Obviously, we're tied up with her on sponsorship, but it brings new light to JR Motorsports, so hopefully that will help us ..."

"It's very exciting. The branding and the stuff that we've done with Dale Jr. -- to be where he is in the sport -- it's equally exciting to bring her along and just have a new set of eyeballs watching and the female factor, with the young girls and the role-model thing. I'm really excited about it."