2 Dan Bilzerian Just Got Arrested, But For What? [Updated]

Dan Bilzerian Takes His 427 Shelby Cobra for a Spin: Going to the Gym

Poker-playing millionaire Dan Bilzerian recently took his 427 Shelby Cobra for a spin. Seeing the man behind the wheel of his widow maker reminded us about the time he drag raced it against a Ferrari 458 Italia, three years ago. The renegade of Instagram even placed a $400,000 bet against his friend, famous attorney Tom Goldstein.
1 photo
It’s kind of funny Bilzerian still has the 1965 Shelby Cobra. First time we saw this car it was three years ago, when the hustler challenged Golstein in a quarter mile race (you can check the race in the video below). On March 9th, the two men brought their cars down to the Las Vegas Motor Speedway racetrack and put their money where their mouth is. Bilzerian won the race, leaving most of the people pretty surprised.

After all it kind of sounded like real madness, considering the race was between an American muscle car from the 60s and a high-tech, thoroughbred Italian supercar. Moreover, the ride the poker player was driving is most likely a copy, as the actual Cobra is quite a rare car. And who would dare to wrap an original Shelby Cobra?

Bilzerian might be the man who likes to shock everybody with his crazy lifestyle, but he also is quite the car enthusiast. In fact, he owns a big fleet of beautiful rides, which includes sportscars, supercars, SUVs and what not. On the other hand, the millionaire is definitely a driver of great contrasts. Here he is buying a huge Brabus G63 6x6 AMG, there he drives a classic to the gym. 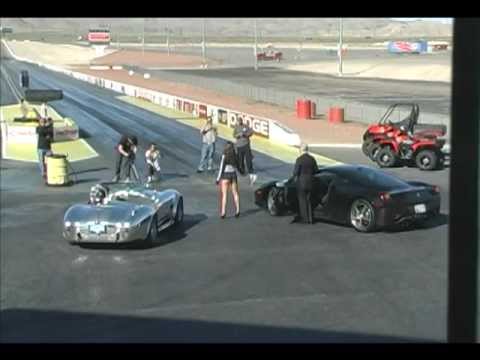