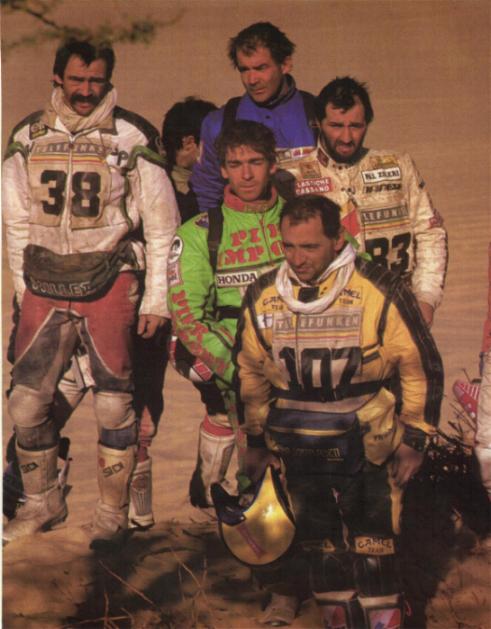 The Dakar Rally has always been the scene of some of the most intense and breathtaking tests of bravery in the world. Aside from the fact that it involves several forms of motor racing, this race has always been about something more than just getting to the finish line first. When you take a look at the victim toll throughout its 30 years of existence, you might agree that finishing IS important enough. Going through the archives, we made a short list – as most of the victims were pure spectators that didn't made the headlines and were regarded as 'insignificant' to the race organizers – of the men who wanted to go all the way and prove themselves to the world. Unfortunately, they stopped half way...

1986 – Thierry Sabine, the very man who invented the Dakar Rally less than a decade before, lost his life following a helicopter crash on January the 14th, 1986. While conducting a routine check on the Paris-Dakar caravan in Mali, pilot François-Xavier Bagnoud lost control of the Ecureuil helicopter during a sudden sand-storm, crashing into a dune. The two were instantly killed, along with the other three onboard passengers: singer-songwriter Daniel Balavoine, journalist Nathalie Odent and RTL radiophonic engineer Jean-Paul Lefur.

1988 – DAF Truck co-driver Kees Van Loevezijn lost his life during the 7th stage of the 1988 Paris-Dakar Rally, the his truck somersaulted at over 180 km/h. He was practically thrown out of the truck and killed instantly. He died in the same truck that had previously won the truck class in the 1987 Dakar Rally. Following the dreadful accident, DAF Trucks decided to withdrew from the sport for good.

Only one stage later, co-driver Patrick Canado lost his life near Arlit (still in Niger). Some days later, when the Dakar caravan crossed the country of Mali, motorcyclist Jean-Claude Huger was the third and last competitor to lose his life in the 1988 edition of the rally. Belgian biker Andre Malherbe was also injured during the 5th stage of the competition, the accident later leading to paralysis.

Also in 1988, no less than 4 spectators were killed during the Paris-Dakar Rally: Mali's 10-year old girl Baye Sibi who was killed by a Dakar vehicle while crossing the street, a Mauritanian women and her child who were killed by a film crew vehicle and a Senegalese girl who fell from a wooden Dakar platform. PANA news agency representing the Dakar Rally organizers publicly stated that the 4 deaths were “insignificant for the organizers”, attracting immense criticism from the Vatican.

1991 – Charles Cabannes, support truck driver for Citroen, was shot dead during the 9th stage of the Paris-Dakar Rally, between Tilia and Gao. Cabannes was found shot at the side of the road, but the killing was not claimed by any rebel organization in the following days. However, it is believed that his death had something to do with the outspoken conflict between the Malian army and Touareg rebels. The rally organizers decided to cancel the following 2 rounds on schedule.

1996 – Much like Cabannes, truck driver Laurent Gueguen fell in the middle of a conflict between the Moroccan army and the Polisario Front rebels. While trying to finish the stage from Foum El Hassan and Smara, his truck ran through a landmine and was completely destroyed. He was killed instantly. 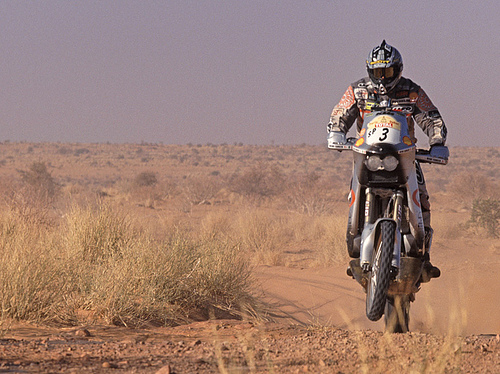 2003 – French driver Bruno Cauvy lost his life during the 2003 edition of the Dakar Rally, after his Toyota teammate & driver Daniel Nebot lost control of his car mid-way through the stage between Zilla and Sarir (Libya). The car overturned at high speed and resulted in Cauvy losing his life instantly, while Nebot escaped with a few injuries.

2005 – This edition of the Paris-Dakar Rally marked the death of two motorcyclists: Spanish biker Jose Manuel Perez and ex-Dakar winner Fabrizio Meoni. Perez crashed out in the 7th stage of the competition and was immediately transferred to the nearest hospital in Senegal, having suffered from intense stomach injuries. He underwent surgery – losing a kidney and his spleen in the process – but his death could not be avoided. He was declared dead three days later, on Monday, January the 10th.

The very next day, two-time Dakar champion in the bike class Meoni had barely started the stage between Atar and Kiffa in Mauritania when he crashed his bike only 6 miles away from Atar. He sustained some serious injuries and, although the medical staff arrived by helicopter less than half an hour later, he was declared dead less than an hour after the accident.

During the 13th stage of the competition, a 5-year old Senegalese girl also lost her life after being crushed by a service lorry when crossing the street . 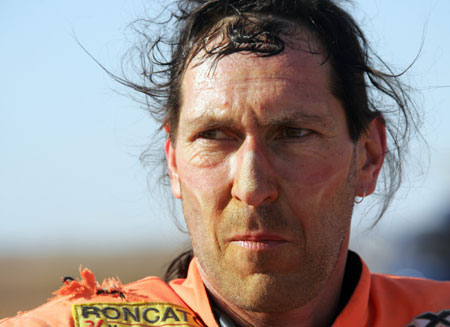 2006 – Following the tragic death of two motorcyclists in the 2005 edition of the Paris-Dakar Rally, another biker was to lose his life a year later. And it was still in Mauritania that it happened, on January the 9th 2006. Australian KTM rider Andy Caldecott sustained serious neck injuries after crashing his bike in a very fast section between Nouakchott and Kiffa. The Aussie, who was on his way to completing his 3rd participation in the famous endurance race, had managed to win the 3rd stage less than a week earlier. He died only kilometers away from the place Meoni was found nearly dead a year before.

Following his death, KTM expressed their wish to withdraw from the rally due to the poor protection for the Dakar competitors.“This is really difficult to accept and there needs to be more protection for riders but it is too late for Andy,” KTM's Spanish team director Jordi Arcarons said at that time.

Two boys were killed in two consecutive days (13th thru 14th of January) after being hit by members of the Dakar Rally caravan. The first was a 10-year old who wanted to cross the street and was hit by Latvian driver Maris Saukans, while the second was a 12-year old killed by a support lorry.

2007 - South African off-road bike racer Elmer Symons was killed as a result of a crash in stage 4 of the Dakar Rally, in Marocco. The KTM rider crashed mid-way through the 4th stage and, although the organizers sent a medical team immediately to the accident scene (as they were reported an immediate stop by the biker), he was already found dead. 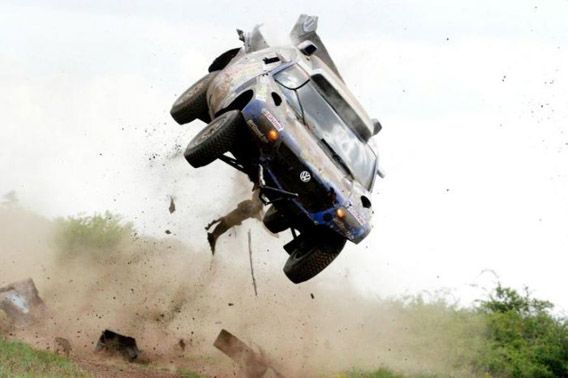 A few day later, only hours before the end of the rally, 42-year-old motorcyclist Eric Aubijoux presumedly died of a heart attack. However, after a thorough examination from the local medical staff, it appeared the cause of death was internal injuries suffered in a crash earlier in the rally.

2009 – French motorcyclist Pascal Terry went missing after the 2nd stage of the Dakar event, hosted for the first time by the South American continent. Terry was on his very debut in the competition. The 49-year old was found dead by the rally organizers some 4 days later in a “hard-to-reach area in the middle of very dense bush-like vegetation 15m from his bike”. Later on, the Argentine police issued a statement, saying the cause of death was pulmonary edema.

However, the most frustrating thing was that Terry's death could have been easily avoided. The Frenchman seems to have issued an emergency call to the organizers during the course of Sunday stage, but the Argentine officials did not commence search as it was wrongly reported that Terry had got in contact with the camp at the start of Stage 4.