Daily-Driven Gallardo Deemed Filthy for a Lambo, Time for Some Chemistry Magic

Cristian Gnaticov
Mold, dead animals, lots of rust, and gross interiors. This is what one can expect to see in a car detailing video most of the time, but not in this instance.
14 photos

That’s because the vehicle depicted on film down below is not that old, considering that it came to life in 2007, though it was nonetheless deemed as filthy by Lamborghini standards.

The reason behind it is that it was used as a daily by its previous owner, supposedly a Las Vegas hypnotist. After messing with people’s minds, with a Gallardo Spyder waiting in the parking lot, he decided to sell it. The new owner, who recently took possession of the said supercar, wanted to make sure that it looks brand new inside and out, so they turned to AmmoNYC.

In turn, the company worked its magic on everything, starting with a simple wash and continuing with the removal of the paint protection film. Then, they took care of the wheels, underbody, cockpit, and everything else, and wrapped it up in a new clear film that will keep it protected from chips for years to come. Some of the chemistry magic was explained for anyone brave enough to do the same to their ride, though we’d entrust it to a professional if we were you.

Once everything was inspected, the car was presented to its owner, who was obviously stunned by the fresh looks and got to install the new rear badging on his own. Subsequently, it fired up its naturally aspirated V10, which used to push out 520 horses back in the day, enough to rocket it to 62 mph (100 kph) in roughly 4 seconds, and left the shop for a quick drive in the open, looking all sharp and shiny under natural light, as you are about to see in the video that follows. 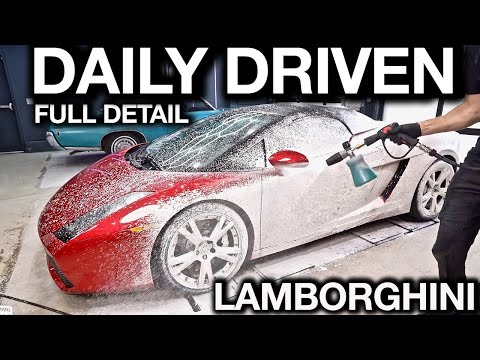