1 Daihatsu Copen Will Be An Awesome Convertible Kei Car, In Japan

C-Class V205 L Spotted in China With Almost no Camouflage

Gabriel Brindusescu
Story goes like this: if you live in Japan and don’t like drifting, stanced rides or time attack track monsters, you’ll probably be driving a kei car, or the Toyota Aqua. And that’s because you really don’t need power on Japan’s roads which are mostly limited to 40-50 km/h (25-30 mph).
1 photo
But then, if you want a cool kei car, you should definitely count the new Daihatsu Copen in, which also happens to be the smallest folding hardtop roadster around.

Actually, there aren’t many convertible kei cars around, especially new ones, that will offer the benefits of the new Copen. Excluding the power which in kei car rules is limited at 63 hp, the upcoming Copen promises to be the best-looking and best handling kei roadster so far. The bug-resembling body of the previous model has been restyled, now coming with much straighter lines, frowned headlights and a big trapezoidal grille, while the light monocoque framework underneath has been reinforced for better cornering.

They say it’s three times stronger than in the previous Kopen, which also allows for greater customization, because all the body panels (excluding the doors and roof) are hold on with a few bolts, so you can change them with different design ones.

This also applies for most of the interior trimmings, making the Copen even more customizable than the new Toyota Aygo. And in case the rain spoils your drive around the coast, you’ll just need to slow down, press a button and in 20 seconds a solid two-piece aluminum roof will raise from the trunk sealing you up from the elements. 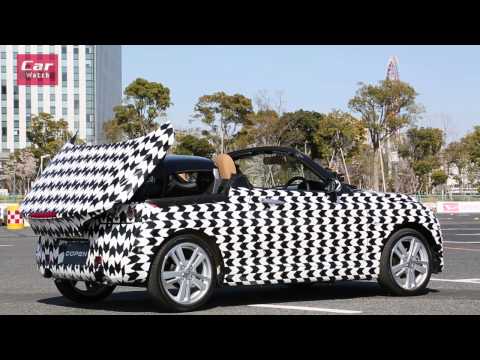