3 Chinese Harmony, the Fastest Train on Earth
Up Next 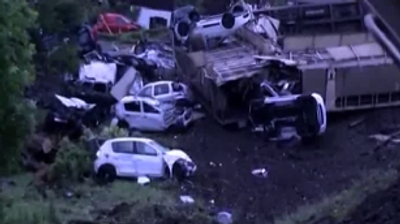 A freight train carrying Dacia vehicles from Romania to France derailed yesterday in Bludenz, Austria, due to what appears to be a technical malfunction, causing some 200 new Logan, Sandero and Duster models to be destroyed or damaged (the number of cars damaged is yet unconfirmed, with sources poiting to anywhere in between 100 and 200). There were no victims reported in the wreck, but the driver of the train needed medical care.

According to Euronews, the accident took place at 60 km/h (37 mph). At one point, 10 of the 16 carts of the train came off the rails and rolled over, leaving the others slide for the next 100 meters and subsequently do the same. Initial information points to the brakes, which failed to work properly as the train entered a bend.

So far, there has been no estimation of the damages caused by the derailment. According to realitatea.net, clearing the area from debris might take a few days, period during which railroad traffic in the area will be restricted as 100 people work to clear the track.

Rene Zumtobel, spokesman for the Austrian Federal Railways, says the derailment affected trains to and from Germany, alongside the local ones using the respective track. In all, 100 trains were blocked or diverted via Innsbruck, Munich, Kufstein or Lindau, with replacement buses being used for the ones that could not be diverted.

Below is a video showing the efforts made to clear the track and the extent of the damage suffered by the cars being transported to France.