3 Could a Dacia Jogger Pickup Truck Give the Ford Maverick a Hard Time?

4 This Romanian Automaker Could Do Great in America, If Not for One Massive Problem

5 2021 Dacia Duster Gears Up for LCV Duty With New Commercial Variant
Car video reviews:
Up Next

Dacia Duster Races Audi RS Q8 Up a Muddy Hill, the Winner Doesn’t Take It All

Being one of the quickest SUVs out there, the Audi RS Q8 is no stranger to drag racing, though they're usually of a lot less muddy variety. And somewhat flatter as well.
11 photos

Its opponent for the day is pretty unconventional too, especially if you consider you can buy five of them for the price of one Audi RS Q8. It's the Dacia Duster, one of the cheapest SUVs you can buy (in most of Europe and a few other parts of the world, but not the U.S.A.) built by the Romanian carmaker with considerable input from Renault.

One of the elements to come from the French manufacturer is the engine – in this case, a 1.5-liter four-cylinder turbodiesel that's been around for ages and made its way under the hoods of many cars (including Mercedes-Benz models). It's a very versatile powerplant that's best known for its lack of thirst when it comes to sipping diesel but can also offer a decent punch at low revs.

Well, the German contender does have three things going against it. First, there are the tires. Being a sporty SUV, the RS Q8 has grippy street tires, whereas the Duster gets a set of all-weather tires (or all-season, as they call them in Europe). Mat Watson initially calls them "all-terrain" but looking at their profile as well as the affordable SUV's performance, we think that was a slip of the tongue that was actually supposed to be "all-season."

The second drawback for the Audi is its massive weight. It weighs well over 5,000 lbs (2.3 tons), whereas the Duster comes in at just under 3,200 lbs (1,450 kg). However, since power isn't an issue, its lardiness might actually come in handy given how slippery the surface is.

Finally, the third hindrance is probably the most important one too: its price. Taking an expensive piece of machinery off-roading is never a good idea because not a lot has to go wrong for the number of digits on the repair bill to reach four, or even go beyond. Scratch one of the 23-inch alloy wheels? You're in deep trouble. Scratch all of them and you might as well buy a Duster for the price to replace them (that's an exaggeration, but you get the idea).

So, are 115 hp and a much less renowned all-wheel-drive system than Audi's quattro going to be able to keep up with the 600 hp-strong RS Q8 in a drag race up the hill? The answer, somewhat unsurprisingly, is "no." However, the drag race is only the beginning of what is a full-blown off-road challenge between the two, which means it'll take a lot more than that to be crowned the overall winner. We won't say who it is, but we will say this: we can almost guarantee it's not the result you are hoping for. 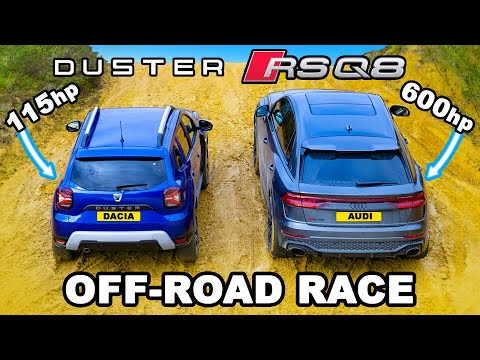