Dacia Cleverly Transforms Your Smartphone Into a Functional Infotainment Screen

While luxury manufacturers are releasing bigger and more complex infotainment screens with each new vehicle, Dacia keeps it simple. The Romanian low-budget car manufacturer has introduced an innovative feature on the low-end trims of its refreshed Sandero and Logan models that transforms your smartphone into an infotainment screen.
10 photos

For those unfamiliar with the name, Dacia is a Romanian carmaker part of Groupe Renault. It makes some of the most popular budget-friendly vehicles on the European market, including the Logan and Sandero, which recently received a comprehensive makeover.

Although higher-end trims come with an integrated 8-inch touchscreen with support for Android Auto and Apple CarPlay, the base models feature a low-end yet innovative system called Media Control.

It includes a radio, two speakers, a USB port, Bluetooth connectivity, steering wheel controls, and, most importantly, a docking station integrated into the central part of the dashboard, which cleverly incorporates any smartphone into the driving experience.

Drivers can easily access all the car's essential functions like navigation, radio, music, phone, and even detailed vehicle information since it connects to its on-board computer. The app is fully customizable, so it’s possible to create shortcuts to widgets and applications of frequently used contacts.

In terms of navigation, Dacia’s representatives say the app offers a wide choice of map and guidance providers. What this means is that the user will be redirected to another app like Waze, Google Maps, or Apple Maps when selecting the navigation function.

The multimedia feature provides access to the vehicle’s built-in radio as well as playlists stored on the device, music platforms, or media stored on a USB stick.

When it comes to the phone, in addition to calls, all the essential functions are integrated. Drivers can find a contact in the phonebook, check the call history, or access the events planned in the calendar. Additionally, on Android devices, and soon on those using iOS, the SMS function can even read messages aloud.

As for vehicle-specific information, the Driving ECO feature gives access to real-time fuel consumption and personalized driving tips at the end of each journey.

For added safety, drivers can change tracks, radio stations, vary the volume, or even answer or hang-up calls using the steering wheel controls. All actions performed on the smartphone are also replicated in the small central display found between the tachometer and the speedometer.

Additionally, the system includes a handy feature for the forgetful ones among us in the form of a "forgotten phone alert," which audibly notifies drivers that their device is still in the docking station when they’re about to leave the vehicle.

Once the device is removed, the docking station can be discreetly concealed by closing the integrated lid.

Dacia’s Media Control system is the perfect example of truly smart device integration into cost-effective vehicles. Sure, a dedicated infotainment system is maybe more convenient, but this system is incredibly clever and practical for those who can’t afford it. 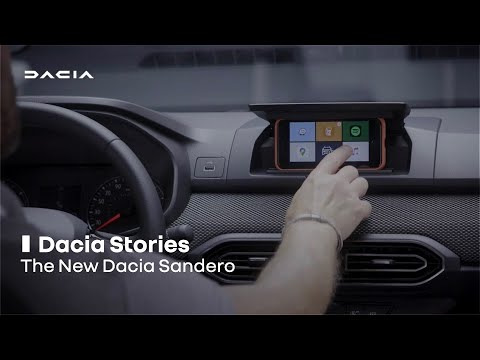