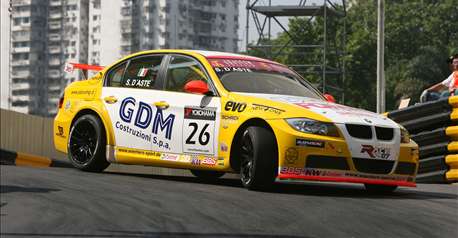 Stefano D'Aste has finally made up his mind. And this time it's official. The 33-year old Italian driver signed a new deal with Wiechers-Sport for the upcoming FIA World Touring Car season. He will therefore rejoin the team with whom he had the best results in the championship so far, winning the Independents Trophy in 2007

“That was a very successful season, although we had some understanding problems in the first part of the season. But after the third meeting we sat together to talk and sort out all issues. Afterwards we were able to find the best way of working together and won the title. Now we all are more experienced and I expect to be competitive from the very beginning of the season,” said D'Aste after securing the deal.

The German outfit is yet to officially name its drivers' lineup for the upcoming season, as a teammate for D'Aste has not been announced. Wiechers-Sport are hopeful that their quest for a second driver will finalize by early January.

Earlier this month, D'Aste was very close to signing a one-year extension to his deal with Proteam Motorsport. However, the Italian was unsatisfied with the terms of the new contract and decided to look elsewhere for a job in 2009.

His main disagreement with Proteam has its roots back in the 2008 season, when D'Aste blamed his team principal Valmiro Presenzini for not serving him with the best racing resources to help him retain the Independents crown. He eventually finished the season 3rd overall – 2008 champion was teammate Sergio Hernandez – after refusing to take part in the last race of the season, at Macau.