Cyclocopter Has a Unique Approach to Generating Thrust for Flying

When it comes to VTOLs (vertical take-off and landing), such as helicopters and other aircraft, the most common approach used to lift these vehicles is to use rotors that rotate on a vertical axis. In order to produce an upward thrust to stay in the air, an airfoil is rotated around a vertical axis, spinning and generating lift. But the Cyclocopter has its own manner of doing things.
6 photos

Turns out there’s another way to make a drone fly: by using cycloidal rotor propulsion. In this case, the rotors of the aircraft rotate around the horizontal axis, rather than the vertical one.

Nicholas Rehm is a guy you can find on YouTube and who built a cyclocopter that uses this technology, although, to be perfectly honest, he didn’t invent it, as it exists since 1909. However, it wasn’t used on small-scale aircraft like the unique drone. That only became possible thanks to modern microcontrollers.

Rehm’s cyclocopter uses two cyclorotors made of carbon fiber ribs and rods, which do most of the heavy lifting. It also has a conventional propeller in the nose, which has the purpose of counteracting the torque created by the two cyclorotors.

As explained by the YouTuber, the way the rotors generate thrust is by pitching the blades once per revolution so that they always have a positive angle of attack with respect to the airflow. You can adjust the position of the pitching angle with a servo. The cyclocopter also has three motors and two servos.

One of the advantages of this less commonly used technology is that it makes the cyclocopter fly more easily, without pitching its whole body forward or backward when it wants to move forward or backward. With conventional quadcopters, that’s not really possible. The construction of the blades is another aspect to mention, as they don’t need to be tapered and twisted, as it is the case with other VTOLs. The reason for that is you’ve got a constant airflow velocity on the entire length of the blade.

While there are advantages to a cyclocopter versus a conventional VTOL, there are also drawbacks, mainly the fact that the light rotors are not solid enough and can easily break in case of an impact. So they’ll probably stick with the conventional flight principle for now, until they figure out how to fix that. 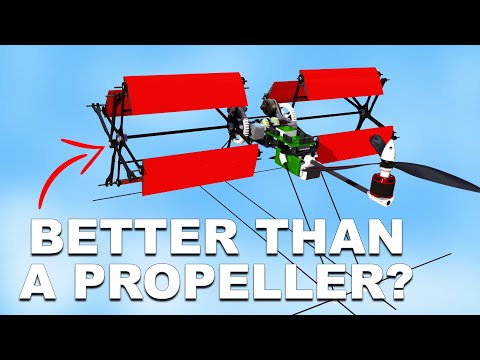