2 Toyota iQ Goes Crazy, Does 12 Death Loops in the Biggest Cage in the World

Can you imagine doing something like this 30 years ago? You would call all your friends to witness and ask them to call their friends as well and, in the end, if you were lucky, 100-odd people would show up.
1 photo
Then, you'd get on your bike and perform the stunt of your life, something everybody there would remember and a story you would keep telling over and over again. At the end of your life, it may have reached maybe... let's say, 10.000 people.

The clip you are about to see was posted a week ago and has already gathered close to two million views, and they can only go up. Why? Because GoPro Hero whatever-number-they've-reached, that's why. Also, the internet.

Ever since action cameras have become so potent, popular and relatively accessible, people have started using them in the most bizarre ways possible. And by bizarre, I mean dangerous.

Have you seen those guys hanging from metal beams or construction cranes with a 300-foot drop and a slab of concrete waiting for them at the bottom? Yes, humankind has always had daredevils, but now this attitude seems to become increasingly accessible.

What's it to us? Well, while we do enjoy seeing these videos and we wouldn't do anything to discourage these guys, that doesn't mean we wouldn't be a bit careful about encouraging them and others like them.

The clip is an entry for a GoPro and Pinkbike sponsored contest offering $20,000 and, of course, the much-coveted fame. It asks people to strap a GoPro to their helmet (well, it doesn't really say anything about a helmet, but we do), get on their bikes and send in the most captivating POV clip they can produce. A recipe for disaster? Well, you can imagine people don't film themselves riding through the park with their kids...

Back to the video in question, the stunt was performed by Primož Ravnik who rode his MTB down the 200-foot high dam and splashed into the water. Could this have gone wrong? Well, yes, but not horribly wrong. But who's to say the next guy won't try something a lot more risky? Or maybe Felix Baumgartner will get his bike on a balloon, climb to the stratosphere, jump off and just put an end to this thing. 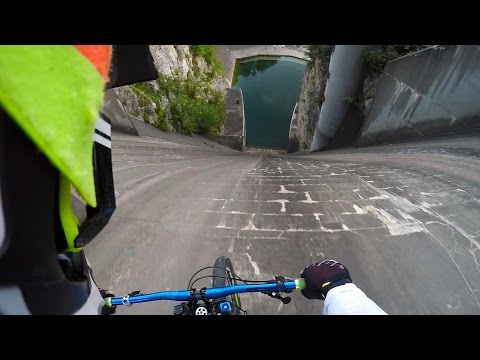