5 No Tesla Cybertruck from LEGO, Despite Massive Fan Support
Car video reviews:
Up Next

Nissan's ProPilot 2.0 Assist Tech: How It Works and What Are Its Limitations

There is absolutely no doubt the design of the Tesla Cybertruck is 100 percent disruptive, and 99.99 percent of that was intentional. Franz von Holzhausen knew exactly what he drew, and Elon Musk knew very well what he was ushering onto that stage a little over a year ago.
6 photos

It was something the world had never seen before outside of a movie set, and yet it is something people will likely be able to buy another year from now. Well, we don't about the second part of that statement, but the first one is actually wrong. How do we know that? We don't. Well, we didn't, not before we listened to Mr. Frank Stephenson talk about the electric pickup's design.

We won't go into who Frank Stephenson is - most of you already know, and for those who don't, there's this thing called "Wikipedia". Suffice to say he's been around the car design world for a long time and has come up with stunners such as the McLaren P1 or the Maserati MC12.

If you only take one thing out of this nearly ten-minute-long video, then it should be this quote: "Our job as designers is not to guess what the future will look like, but to decide what it will look like." That's where Frank's gripe with the Cybertruck stems from: the Cybertruck doesn't really preview a future you would want to live in.

He says he can understand why people were so shocked to see it for the first time. For him, though, it was just an opportunity to remember a 1980 concept from Citroen called Karin. And, when you see it, you will understand why: they both embrace the wedge shape like no other vehicle out there.

However, that's where the similarities between the two end. Unlike the Cybertruck, which has a cold, even impersonal design, the Karin manages to maintain a certain warmth about it, despite its pointy overall shape. Granted, they belong to two very different segments, and Frank acknowledges that, but even so, he argues that Tesla could have done something to sweeten the Cybertruck at least a little bit, emphasizing the sterile feel of the interior in particular.

He also makes a good point about the Cybertruck's bulletproof glass and solid steel panels, saying this type of features alludes to an unsafe, paranoid, pretty much dystopian future. There's also a definite military feel about the Cybertruck's appearance that supports his claim, and its ability to deflect bullets can only enhance that.

All in all, it took Frank over a year to come out and discuss his take on Tesla's pickup truck, which is a testament to how important he thinks its design might be. Well, better late than never, as this is a very interesting insight from somebody with undeniable credentials. Watch the clip for yourself for the full experience, not to mention a pretty delicate put-down of the Cybertruck right at the end. 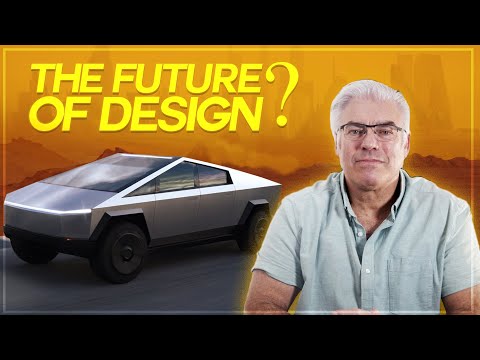