5 Speed Triple 1200 RR Conquers the Nürburgring in 443 Seconds
Car video reviews:
Up Next

Not only is this specimen a visual treat, but it also sounds seriously rad with that tailor-made exhaust.

Brought into the spotlight by pop culture icons like Steve McQueen and Elvis Presley, desert sleds have a history stretching back several decades. It all began on the arid terrains of Baja and the American Southwest, where motorcycle racers would gather to take part in gnarly scrambles traversing vast (and equally desolate) landscapes.

Obviously, participants needed their machines to handle countless miles of treacherous sand-crawling without so much as a complaint. This necessity is what gave birth to the desert sled subgenre, with early iterations being, for the most part, heavily-modified Indians and Harleys. Lighter British twins took over in the 1950s, but they too were later replaced by two-stroke dirt bikes with reduced complexity and way more grunt per pound.

Despite this transition, two-cylinder Brits like the Triumph Bonneville are still the platforms most people think about when they picture a sled conversion. Thus, it only made sense for the Aussies over at Purpose Built Moto to go down the desert racer route on the project we’re about to examine. The commission came from a client named Azad, and a 1973 MY Bonneville T140V is what Tom Gilroy and his team had to work with.

Upon arrival at their workshop, the donor looked woefully neglected on both a cosmetic and mechanical level, with leaky gaskets, tons of rust, and a dead engine. “If you have a nice old bike and you want to keep it that way, make sure you use it,” says Tom, referring to the long period of improper storage experienced by this Bonnie prior to the overhaul.

PBM performed a complete teardown to kick things off, then they outsourced the powertrain-related work to Justin Holmes of PopBang Classics – a local Triumph expert and regular collaborator. The carbs were rebuilt in-house, however, and they were subsequently fitted with high-grade air filters from DNA’s inventory.

Although it has the appearance of a straight-pipe system, the new stainless-steel plumbing is actually equipped with internal baffles to keep noise levels in check. Moving on to the motorcycle’s running gear, the Purpose Built squad decided to retain some vintage flair by keeping the original brakes in play but had them thoroughly refurbished inside out.

Meriden’s classic icon saw its telescopic forks chromed and rebuilt with modern internals, while the rear shocks have been deleted in favor of longer aftermarket substitutes sporting progressive springs. Laced to the OEM wheel hubs are 18-inch valanced rims, and those knobby yet road-friendly tires come from Pirelli. Custom-made aluminum fenders can be spotted at both ends, with the rear unit carrying an LED taillight and a triangular license plate holder.

Deciding to leave the framework unchanged, Tom’s bike-modding connoisseurs fabricated a fresh seat pan following the lines of the subframe. This item was then topped with a thick layer of foam padding, neatly upholstered in black leather by Timeless Auto Trim’s Jamason Gossow. Besides resurrecting the bike’s parallel-twin engine, Justin from PopBang was also tasked with overhauling and repainting its gas tank.

The end result has much in common with the styling previously worn by the tank, but it brings about an invigorating silver twist that looks absolutely mesmerizing. Furthermore, the same finish can be seen on the Bonneville’s side coves, which were previously tweaked to keep proportions nice and tight.

Another piece of stock hardware that was retained is the Lucas headlight, though the bucket it’s encased in has been tweaked to accommodate the speedo. PBM got rid of the tachometer altogether and treated the handlebar to Kustom Tech levers, reconditioned switches, and new grips. To round everything out, they sprinkled the sled-style Bonnie with LED turn signals and a healthy dose of chrome plating. 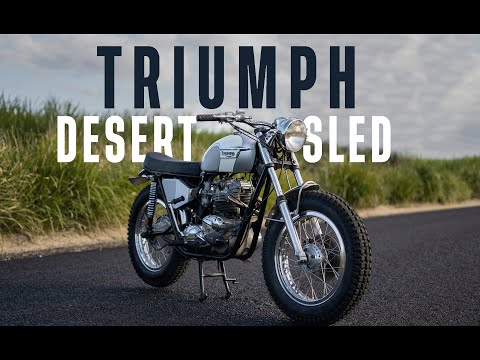