Going off-road with a former military 6x6 all-terrain vehicle is already a cool start for a wild adventure. Driving one that comes with funny, uplifting messages all over its mean-looking, massive body, is taking it to the next level. It’s like saying “I’ll show you my goofy side, but don’t forget who you’re dealing with” – and that’s one strong message.
24 photos

It’s not uncommon these days for people to turn retired military vehicles into adventure vans. After all, these things were specifically built for rough terrain and challenging road conditions. Similar to the Unimog, although not as famous, the Pinzgauer goes back to the 1960s, when its military service with several armed forces from around the world began.

Austria-based Steyr-Puch manufactured a 4-wheel drive version, the 710, and a 6-wheel drive version, the 712, with optimized grip and increased towing capacity. These all-terrain vehicles were fitted with a 2.5 liter inline four-cylinder engine that was meant to be hassle-free in terms of maintenance, but strong enough to reach a top speed of 62 mph (100 kph) on-road.

One of these retired 6x6 beasts is soon going under the hammer. The 1971 Steyr-Puch Pinzgauer that’s listed by RM Sotheby’s is actually a modified 712DK, which means that the initial 710K got 2 extra wheels and was set-up as a 4-door crew cabin pickup. The body apparently came from a Swiss military-owned 712M (with a soft top and rear passenger seats), which was then made to fit the original structure – the roof was shortened, the seats were moved forward and another roof hatch was added.

Apart from being a modified version, this 712DK has a one-of-a-kind look: contemporary art meets military ruggedness in a truly unique design. British artist Nico Sclater, known as Ornamental Conifer, is the one who customized the Pinzgauer in an unusual way. We’re not sure if this former army machine would be proud to boast such flower-power messages, but the striking aesthetic effect is undeniable.

Part of the Paul Andrews Estate Collection, this 1971 Pinzgauer is going up for auction on August 12, and could get to $80,000. 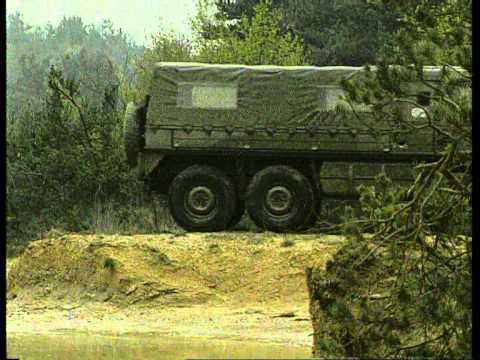