1 The Strange Case of $80M Superyacht Polaris, Which Escaped Sanctions and Then Came Back

One of the most secretive, custom superyacht explorer projects in the world, Lurssen’s Icecap, is out of dry dock at the shipyard and, for the first time ever, seen in physical form.
7 photos

Icecap, or Project Icecap, was announced in early 2018. Just months later, Moran Yacht & Ship announced that Icecap had been sold to a then-secret buyer. Asking was withheld, but the reported price tag is $350 million. But the luxury yacht brokerage did say then that, once completed, Icecap would be among the world’s largest and most innovative vessels.

Icecap is out of the dry dock, which means it’s been seen in physical form (as opposed to renders) for the first time. Under construction at the Peene-Werft shipyard in Wolgast, Germany, it’s on track for a 2023 delivery. At 107 meters (351 feet) in total length and an interior volume exceeding 6,500 GT, Icecap will be, indeed, one of the largest superyachts in the world when delivered. However, what will ultimately set it apart will be performance.

The owner of Icecap was later revealed to be Canadian billionaire John Carter Risley, the founder of Clearwater Seafoods and an avid fisherman, seafarer, and experienced yacht owner. Speaking with the brokerage that same year, he explained that his second Lurssen yacht, Icecap, came to be out of an understanding of the limitations of smaller boats.

“My first love is sailing, absolutely,” he explained. “Having said that, if you are going to spend a lot of time on the water, then you have to realize there are limits associated with sailing, especially when it comes to longer trips and the logistics that come with that.”

Risley believed bigger was better, but not just for the sake of it: bigger was better because it meant different things. With Icecap, this included a hybrid propulsion system, large battery banks in lieu of generators to run hotel functions, “state-of-the-art energy saving, power storage, heating and cooling,” more room to store all kinds of gear (just not submarines, because he’s claustrophobic), a redesigned engine room to house three Wärtsilä engines for enhanced performance and range, and an ice-class hull. And these are just the features revealed to the media.

Icecap will have a very vast aft deck, with a helipad that lowers the aircraft into storage, cavernous side garages for tenders and diving gear, and accommodation for up to 20 guests across 10 cabins. There will be an observation room on the upper deck (Icecap has five decks in total) and luxury amenities of the kind you’d expect from a custom vessel.

Work on Project Icecap is still underway, but you can still appreciate its beauty in motion in the video below. 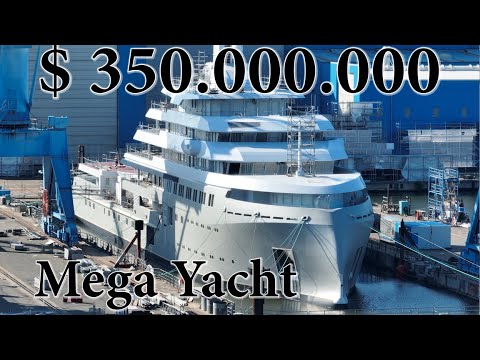