Born way back in 1992, the third-generation Mazda RX-7 (a.k.a. the iconic FD) has remained popular ever since with rotary engine fans. It should be noted that a model from 1993 – the same year as the model seen in the video below – was even driven by Vin Diesel's Dominic Toretto. The character, mainly associated with the Dodge Charger, was presented alongside the rotary RX-7 in the early scenes of “The Fast and the Furious.”
56 photos

Although Mazda’s rotary set pieces are (in)famously noted for the love-hate relationship they develop with their owners, this particular build brings only the fast portion of the well-known Hollywood franchise. As far as the “furious” one is concerned, they seem to have settled on a more relaxed attitude.

That is a statement to how laid back is the personality of the RX-7's owner, who even explains to Chris, the host from That Racing Channel, that he’s had the Mazda for about “four years, most of it not running cause’ it’s a rotary.”

With that, we could say case closed, but when the custom RX-7 does run – it does so magnificently. It’s an entirely personal creation, as you’ll get to find out from the 10:07 mark when the very extensive and detailed build process story kicks off. Hot tip - during the ride we fiind out it was recently on the dyno, where it turned 640 hp!

But before diving deep into the explanations, we need to check out the RX-7 going for a drive, which starts from the 2-minute mark, after a short intro to get us accustomed to the ensuing rotary madness. There’s no shortage of ear-deafening acceleration, some four-inch exhaust-shot flames, and continued bewilderment from Chris.

By the way, he’s actually back at the wheel of an FD RX-7 after about 16 or 17 years, so this is a very emotional moment for Chris, actually. We get to see him hoon this BorgWarner-turbo'd rotary piece of mad automotive art from the 8:20 mark.

We saved the best for last, though, because from the 6:46 mark there’s also a chance encounter with a V10-packing Lamborghini Huracan – and the RX-7 easily street-gaps the Italian supercar during both runs. 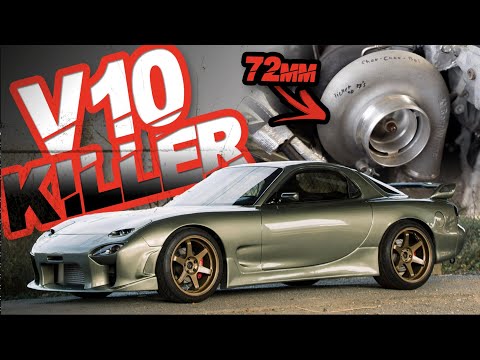