3 These Mad Bikes and Trikes Are Powered by Chevy V8 Engines, Develop Up to 563 HP

There are presently few names as revered - and feared at the same time - in the auto world as that of the Dodge Charger. Ever since its introduction back in the glorious 1960s, the nameplate has been at the top of the shopping list for people looking for raw performance and badass looks.
45 photos

As a whole, only a handful of cars have retained their bad boy image since originally created decades ago, and the Charger is one of them. The more recent lineup, which consists of chill-inducing variations like the SRT8 or SRT Hellcat, is a worthy successor of the original bloodline.

But worthy as they may be, the more recent Chargers are no match for the first or second generation when it comes to being picked and transformed by the custom industry. Case in point, the one we have in the gallery above.

Part of the lot of cars that will go under the hammer in May during a Barrett-Jackson online auction, the customized Charger perfectly blends the mean aesthetics of the early years of the nameplate’s life with some of the modern features we can’t live without.

The body of the car, sleek and mean as it should be, is painted in Burnt Copper, contrasted by the white vinyl roof, serious use of chrome on the bumpers and Budnik wheels, and Halo LED headlights. The interior comes in white as well, this time in the form of leather spread on the seats and door panels, it too contrasted, only this time by the black of the dashboard.

Under the hood, the car hides a massive 512ci (8.4-liter) Mopar big block engine of undisclosed power, working in conjunction with an automatic transmission.

The car will sell during the online auction with reserve, but no mention as to how much it is expected to fetch was made. 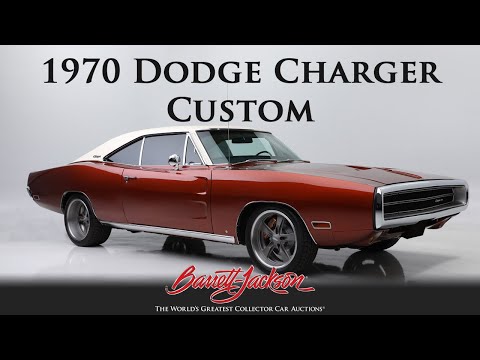