4 Harley-Davidson Model J Built The Traditional Way Can Still Race, and It Shows

5 2019 Harley-Davidson Road Glide 466 Is a Suicide Machine Special
Car video reviews:
Up Next

This year we’ve had far fewer in-person celebrations of the creative minds occupying garages across the U.S. The health crisis put an end to most of the auto and moto shows of 2020, big and small, leaving a lot of incredible builds still in the shadows. Yet some managed to surface nonetheless.
16 photos

In a bid to bring to light two-wheelers made all over the world, Harley-Davidson held a virtual event back in June. Called The No Show, it brought together 60 builders from 10 countries, along with their creations – needless to say, most of them were American.

We’ve talked about a number of them already, but the list is still long, so bear with us as we keep bringing into the spotlight these machines. Today, it’s the turn of a 1962 Panhead - built like many others in The No Show not by a major custom shop, but by a talented individual in his own garage - a modern, chromed nod to the famous Harley engine of the past decades.

The man behind this build is named Ken Carvajal and he’s from Lombard, Illinois. The bike you’re looking at – one that doesn’t have a special name like other introduced in The No Show, like say Sweet Berry Wine or Mantis – was shown in the metal last year at several events, but now had settle for a virtual presentation only.

Sporting a lot of chrome all around, from the 21-inch front wheel all the way to the exhaust at the back, and a vivid color on the frame, tank, and rear fender, the bike features the Panhead engine – sadly we are not being told anything about it and any modifications made – aided in its mission by an aftermarket Linkert M74b carburetor with a Zeppelin Air Cleaner from Pangea Speed.

A custom, low profile seat, a short sissy bar (yet large enough to let the rider strap things to it) and a tank with enough room for 2 gallons of fuel (7.6 liters) are also there to give the bike its special look. 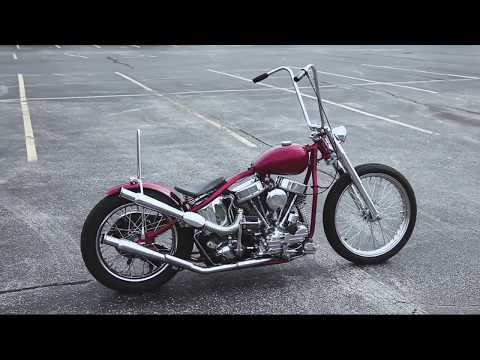