2 Iconic 1960 Chevrolet Corvette Race Car Was Lost for Decades, Is for Sale

3 Princess Diana’s Blue Raleigh Traveler, the “Shame Bike,” Is Being Auctioned Off

5 Very Rare 2007 Saleen S7 in LM Spec Is About to Go Under the Hammer
Car video reviews:
Editorial

A car like this one is a very rare, astonishing find. A 1955 Ferrari 250 Europa GT Coupe coming up for auction in May 2021 is a stunning time capsule, an unlikely barn find, and quite possibly the only made-to-order unit of a very limited series.
18 photos

Here is Chassis 0413 GT, offered by Gooding & Co’s at the upcoming Geared Online sale that will take place between May 3 and 7. According to research conducted by Ferrari historian Marcel Massini, it was completed in October 1955 and delivered to one of Ferrari’s earliest patrons, Dr. Enrico Wax, back then the official Italian distributor for Johnnie Walker and Moët & Chandon. Believed to have been made-to-order, the 250 Europa GT comes in Grigio Metallizzato (now covered in patina) over gorgeous orange leather interior, and boasts a series of distinctive elements, like a special instrument arrangement and taillight treatment.

The earliest history of the car while in Italy remains shrouded in mystery, but it is known that it made its way across to the United States either in the late ‘50s or early ‘60s. The owner, a Southern California private collector, did not drive it much. In fact, the listing notes, he retired it from the road that same decade, turning it into a static display in his private collection, which included another Ferrari and several Fords of that era, all of them unrestored.

The GT is completely original and unrestored, which makes it a rare time capsule. It is dubbed a barn find because it effectively slipped off the map and was unheard of for decades. This marks the first time it’s seen in public since the ‘60s, and the first time it’s offered at public auction.

Under the hood is a 3.0-liter Colombo-derived V12 that develops 217 hp and is good for a top speed of 143 mph (230 kph). A 1959 Automobile Club d’Italia sticker is seen on the side mirror, and original Pirelli hoses can still be found in the engine bay. This car hasn’t been touched since the ‘60s, so it should be an appealing offer to anyone who appreciates original, time-capsule vehicles, the auction house believes.

It’s also an “once-in-a-lifetime opportunity,” so expect a price to match: the auction house estimates it could fetch between $2.2 million and $2.6 million when the gavel drops. 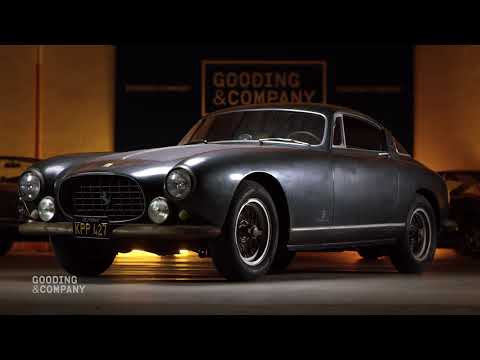