Aurel Niculescu
Without necessarily being fans of videos that aren’t shot in English (thankfully, this one comes with professionally translated subtitles), Daniel Abt’s YouTube vlog channel has grown on us thanks to a few great battles. This time around, the Cupra Formentor and Volkswagen T-Roc R might not impress us with the overall power, but they thoroughly compensate with thrilling runs, with one of them ending in a great photo finish.
52 photos

The Cupra Formentor compact crossover SUV is the Spanish brand’s first vehicle designed specifically for the new standalone Cupra brand. Its production hasn’t started that long ago, so even though the company has already revealed the hotter VZ5 (which borrows the Audi RS3's 2.5-liter inline-five engine), the vlogging community is still uncovering the secrets of the regular versions.

Daniel Abt’s YouTube channel has already gotten everyone used to great encounters (usually of the VW AG variety), such as that recent time when the ABT Audi RS7-R tried to settle a tuning grudge with an 829-hp Mercedes-AMG E 63 S. This time around, the combined powers don’t even trump one of those previous monsters, but the Cupra Formentor and Volkswagen T-Roc R duel is a neat alternative.

But first, the competitors. Going against Daniel Abt’s Cupra Formentor was the VW T-Roc R, a model that’s usually labeled as a subcompact crossover SUV, but we think the waters are too murky with the whole T-Cross/T-Roc/Tiguan range to believe things are just that simple.

After a lightning-fast visual presentation to the 0:45 mark, it’s time for the specifications to shine through. They reveal that the Formentor and T-Roc R are very much alike with their 2.0-liter TSI engines sporting 310 PS (306 hp) and 300 PS (296 hp), respectively. There’s a slight advantage for the Spanish model, but the T-Roc R is lighter, on the other hand.

One last thing to consider before we kick off the action (opened up with a soundcheck from the 4:34 mark, where the T-Roc shines because of an Akrapovic exhaust system): the vehicles have different tires and wheels—19-inch for the Formentor and smaller 17-inchers for the T-Roc R.

The first drag race (5:23) isn’t exactly the greatest wheeled spectacle ever because of the driver’s slow reaction time in the Volkswagen. So, the Cupra takes home the first win. On the other hand, get ready for cool thrills from the 6:52 mark because the rematch is one of the closest photo finishes we’ve seen lately.

Apparently, the Formentor got the win again, but only by a couple of hundredths of a second! By the way, there’s also a roll race from the 8:37 mark, probably to give the T-Roc a chance to come out on top for a change. 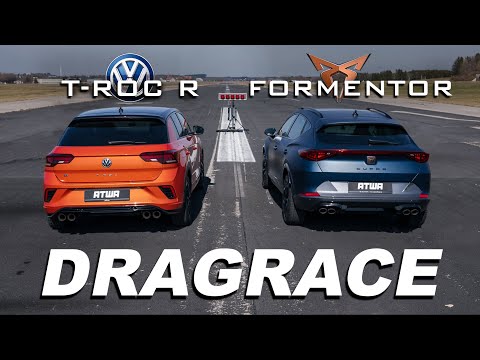