3 35 Years Ago, This Is How GM Envisioned a Mid-Engine, 600-HP Chevrolet Corvette

Have you seen the mind-boggling delivery success of the mid-engined C8 Chevy Corvette over the past couple of model years? So, with that kind of popularity, it’s no wonder they don’t have many commercials.
30 photos

Basically, there’s no need to pour millions of dollars into marketing campaigns when the car already sells like hotcakes. And customers also seem to want the “pastry” that’s still spread out behind closed doors as mere elements of the recipe. Besides, let’s not forget the proverbial bean counters.

So, with a huge legacy behind it and a massive success ahead of it, we shouldn’t be surprised that “America’s sports car” doesn’t do much TV advertising. Not officially, at least, because no one has stopped the fans from having a go at the marketing department’s duties. Enthusiast ideas have been floating around for as many years as GM has been producing Corvettes. But every now and then some do shine out like a supernova.

The good folks over at the Monomyth Studio have created this Corvette-dedicated short film purely as a creative exercise. But we have a feeling it also serves to showcase their self-titled power to “transform brands into industry champions.” And it doesn’t matter because it comes with a message that’s worth popularizing.

Named simply as “Driving the Human Legacy,” the unofficial commercial has a ladies’ voiceover, a couple of cars, and a couple of people. As well as some neat cinematography, a great message to share (one could easily swap Chevrolet’s name with other epic companies), and the potentially perfect atmosphere.

And the narrative is easy to follow. An older gentleman lovingly prepares his garage-kept Nassau Blue C2 Corvette Convertible for a ride, while a young woman hastily makes her way into a Rapid Blue C8 Corvette Stingray Z51 coupe. The action then switches to a two-lane road in the desert and alternatively presents either of the cars. Then, at the pinnacle point, they dramatically meet for just a split second... 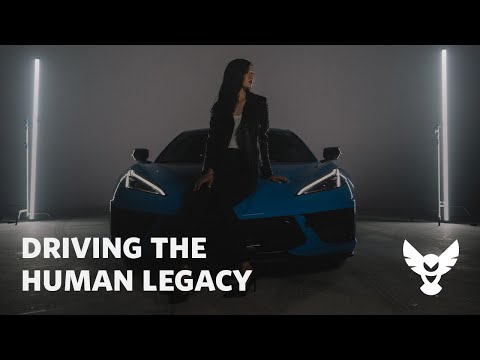