1 Internet Detective Figures Out the Location of GTA 6

Home > News > Videogames
Bogdan Popa
Grand Theft Auto V has remained a gaming sensation even 8 years after launch, and in case you’re wondering how come this is possible, the video you see below shows it’s impossible to ever get tired of playing the game.
1 photo
Because the open-world concept that GTA V is based on allows for an overwhelming number of ways of having fun in Los Santos, including not only the missions that Rockstar has carefully prepared for players but also the crazy stunts that people truly committed to the game have somehow come across.

The stunt that you see here is just the living proof in this regard, as a video published on YouTube channel Hazardous shows how a motorcycle can end up on top of a building even though at the first glance, there’s absolutely no chance to ever do this.

Truth be told, this isn’t the first time when someone puts a bike on top of that building, as other people managed to do the same stunt in the past, but the commitment that some players show when it comes to such things is impressive, nonetheless.

For example, the stunt in the video here took no less than one week to do, so you can imagine how many attempts failed because the bike didn’t have the right speed or didn’t use the perfect angle to jump towards the roof of the building. So while it looks like an easy thing to do, it really isn’t, and people spending weeks to do stunts like this is why GTA V survives in the first place.

In the meantime, if you’re wondering when Rockstar is projected to launch Grand Theft Auto VI, you’d better not hold your breath for it.

The next important release in the queue is a new-gen console version of GTA V, which is projected to land later this year on PlayStation 5 and Xbox Series X|S with improved graphics and possibly some fresh content. 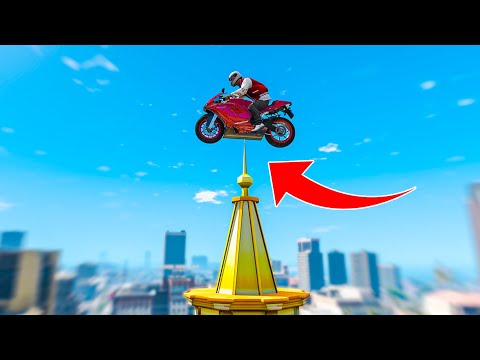