Crazy Carjacker Rams People in Horrific Attempt to Get Away

Home > News > U-turn
Ionut Ungureanu
A Miami hotel surveillance video recently made public shows a suspected carjacker slowly stealing a vehicle before lurching backward and forward several times while hitting cars and ramming people. The footage shows the man turning a normal day into complete chaos, without caring about people getting hurt in his attempt to escape.
1 photo
The incident happened on Wednesday at the entrance of J.W. Marriott Marquis Hotel and the suspect, who was later identified as Alberto Ruiz, was eventually caught. The video shows the thief slowly approaching the Lexus RX 350, before hopping in and ramming into the valets and the customers.

As one can see in the video below, there is no stopping this fellow who keeps crashing into yet more vehicles and hits several people trying to stop him, including the car’s owner, before eventually driving off. “You can see that this individual had no regard for anyone’s life. People were getting wedged, run over, pinned. He could not care less. He just wanted to take off,” Miami Police Officer Rene Pimentel told the Miami Herald.

Miami police captured Ruiz a little over 10 hour later in a Little Havana hotel room. Problem is, the man is now facing several years in prison. He has been charged with carjacking, attempted murder and aggravated battery. Four of the seven people he hit were taken to Jackson Memorial Hospital, and one was in serious condition late Wednesday at the hospital’s Ryder Trauma Center.

Ruiz has an extensive criminal history. His records take up to 22 pages and date back to 1983, when he was first arrested for... yep, stealing a car. 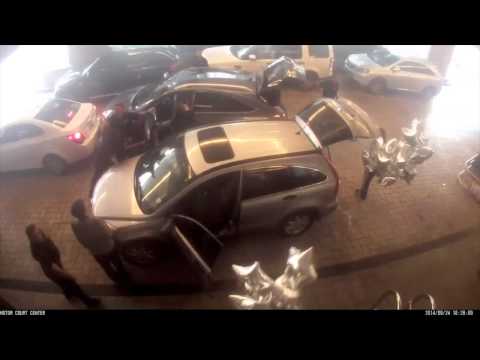