1 Watch a BMW X5 With Serious Rear Damage Get Repaired

5 Damaged BMW 7 Series Is Made to Look as Good as New by Russian Mechanic
Car video reviews:
Coverstory

The Audi Q5, now built in Mexico, is more American than it's ever been. But with 70,000 units of the second generation sold last year, it was only a matter of time before one got crashed and ended up in the workshop of our favorite Russian mechanic, Arthur.
4 photos

At first glance, the damage on this one doesn't look too "exciting." But we decided to watch the video anyway in the hope that it's at least as interesting as that of the Mercedes GLC. The first thing that needed to be done was obviously to inspect the damage and disassemble the SUV. However, that's where the first snag appears.

Because the rear door wouldn't open fully, removing it required some cutting and hammering. After the doors, the next things to be taken off were the sill trim, rubbers, and flares. Next, the damaged rocker panel is pulled out and cut away from the body.

We're amused by Arthur's technique, as this premium SUV is treated to some old-fashioned blankets and used bed sheets. Cutting straight through the B-pillar to fix a dent doesn't seem like a reliable way to fix a car. Maybe another donor panel would have been better for the structural integrity of the Q5.

But perhaps it wasn't in the budget. Sure, the wreck was probably bought at a fraction of the original price. But it's a used car, and the guy who bought it is probably looking for a quick and profitable flip. If you're buying an American import anywhere in Europe, make sure to do your homework.

Even so, you can't even tell it's been in a crash. And instead of filler, the welds are covered with old-fashioned led. So paint thickness scanners might not pick anything up. Watching perfectly straight doors go on is a little more soothing for the automotive soul, though. 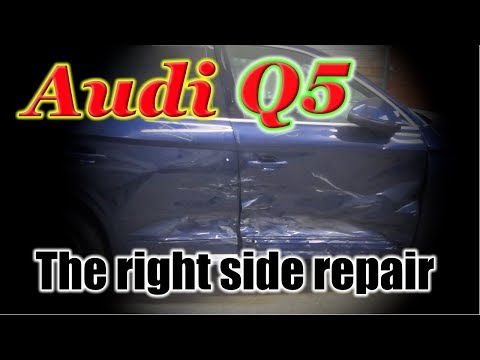