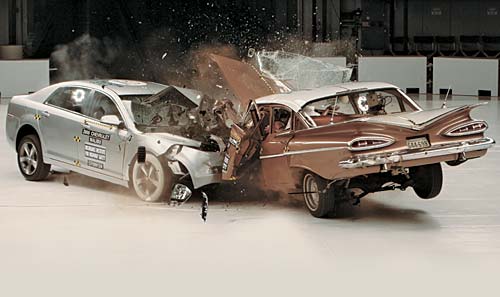 Safety now and then. This was the theme through which the Insurance Institute for Highway Safety decided to celebrate the 50th anniversary. To be more specific, the institute conducted a very unique crash test to perfectly show us the way automotive safety evolved through years: it crashed a 2009 Chevrolet Malibu into an 1959 Chevrolet Bel Air.

There's not much to talk about the results of the crash as we're sure most of you would choose the modern vehicle, especially if talking about passengers' safety. The vintage model was severely damaged at the front, with IIHS engineers claiming that a driver would have died instantly in case such a crash would occur in a real scenario.

As you can see in the photo gallery below (the video is also available after the jump), the 2009 Malibu was affected as well but managed to keep the passenger compartment almost untouched. The driver would only suffer slight injuries, IIHS said in the video. On the other hand, the Bel Air's front practically smiles to us, even if it is photographed from the side.

"It was night and day, the difference in occupant protection," says Institute president Adrian Lund. "What this test shows is that automakers don't build cars like they used to. They build them better."

"On this golden anniversary of the Insurance Institute for Highway Safety, we celebrate this organization's accomplishments toward safer drivers, vehicles, and roadways. We salute the vision of the Institute's founders and proudly continue their commitment to highway safety," Institute chairman Gregory Ostergren added in a statement for the press.