1 This Bipedal Robot Finished a 5K in Less Than an Hour, Can You?

3 This Humanoid Robot Head Has Facial Expressions, Its Grin Makes You Cringe

5 This Smart Toy Car Is the Best Way to Teach Your Kid How to Code
Car video reviews:
Up Next

Maserati MC20 Brightens Up the Décor at Pebble Beach, Looks Great on the Lawn

Could You Identify Some of These Human-Looking Robots in a Police Lineup?

Scientists believe that our brains respond better to machines that have a “human” appearance, which is why they’re striving to build robots that actually have a face and look more and more like their creators. And while most of them are still somehow lifeless or cringey at best, some look so similar to us that it’s creepy.
8 photos

Ever wondered what are the most human-looking robots ever developed? Here’s a compilation with 15 of the best ones.

Digit definitely deserves a spot on the list, despite the fact that it lacks the most human part of them all: the head. However, it makes up for it through its humanoid shape and its AI (artificial capabilities) which allow the robot to walk upright on different types of terrains, climb stairs, and even balance on one leg. It was developed by Agility Robotics, whose goal is to use it in the future for riding in driverless cars and deliver packages to customers.

Nadine is a social robot that looks like your school’s librarian. Built in Singapore, it’s got soft skin, hair texture similar to humans, it can wave its hand at you, and mimic your expressions. It makes for a great receptionist and has intelligent software that is similar to Siri.

Erica is another cool-looking machine with a face and eyes that can melt hearts. The robot was built by Japanese engineers and can be a great conversational companion that nods its head, lets its eyes wander around as it talks with you, and moves its lips.

But they’re also making “dudes” as well, with the Geminoid DK being one of the manliest robots out there. This one is so human-looking that you wouldn’t even be able to separate it from the crowd if you’d cross paths with it. It is a next-gen android built by a company in Japan and it impersonates an actual university professor in Denmark.

These are just a few of the human-looking robots presented in the video, we’ll let you discover the rest yourself. 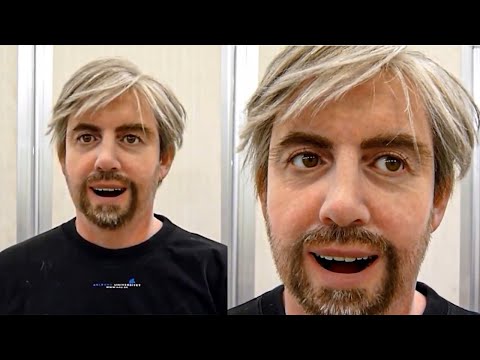