It’s hard not to be impressed with the Corvette C8, even though the only variant available to us for the time being remains the entry-level Stingray. Still, it’s a proper mid-engine, lightweight supercar, and on paper, it’s really good at accelerating off the mark.
6 photos

Technically, it doesn’t have more power than even a stock Shelby GT350, but it weighs much less, is more aerodynamic, has a faster-shifting gearbox, and is superior when accelerating from a dig. Let’s go through all the numbers, though.

Luckily for the Mustang, this straight-line battle featured multiple rolling starts, which is where the latter’s 5.2-liter flat-plane crank V8 unit shines, with its 526 hp (533 PS) and 429 lb-ft (582 Nm) of torque. Now, those are stock figures, and this GT350 happens to have a cat delete/E85 setup.

According to the uploader, it also has a 150 lbs (68 kg) passenger on board, while the Vette’s driver rode solo. As for the difference in gearboxes, the Corvette boasts a Tremec 8-speed dual-clutch automatic, while the Shelby GT350 comes with a Tremec TR-3160 six-speed manual.

You’d obviously rather have the automatic if you’re trying to win a drag race, which is what the Corvette did here, pretty much. The thing is, it wasn’t a blowout win because that Mustang hung in there really well at times, and you can even see it reel the Corvette in at really high speed. This tells us that the Corvette C8 Stingray could really use more power if it wants to become more consistent at winning drag races. 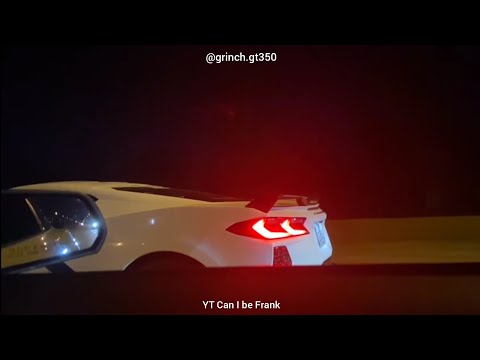