1 Corvette C8 Lowers Its Roof to Let More Natural Light In, Gets a Concave Guilty Pleasure

2 Dodge Charger Hellcat Puts the 'B' in 'Bad', Older Corvette Doesn't Give a Damn About It

Presumably recorded just a few days ago, at the Mission Raceway Park in Canada, the drag race should have solved a hypothetical dispute between the two models. However, one of the drivers didn’t exactly know what they were doing, therefore the battle had a rather surprising ending.

So, which one should have crossed the finish line first? Well, judging by the official spec sheets of each car, that should have been the Chevrolet Corvette C8. The Stingray brags about doing the 0 to 60 mph (0-97 kph) in less than 3 seconds, with a top speed of 194 mph (312 kph). Powering it is a 6.2-liter V8, mounted behind the seats, which is rated at 495 hp and 470 lb-ft (637 Nm) of torque, when ordered with the optional performance exhaust system.

Over in the green corner, the Charger SRT Hellcat Widebody is much more powerful, but also bigger and heavier. As a result, it is slower to 60 mph (97 kph) than its ad-hoc rival. It too uses a 6.2-liter V8, albeit with supercharging, with the engine yanking out 717 horsepower and enabling a maximum speed of 196 mph (315 kph), impressive nonetheless for what is a big sedan. Think you can spot the winner just by looking at the specs? Now head on down and watch the video to see if you were right. 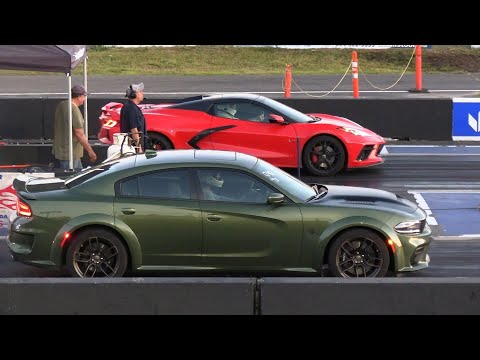