Here's a word of advice for you. If you plan on buying a new car, there's no harm in asking your friends for opinions. But at the end of the day, the decision should be yours. Regardless of your pick, people are still going to argue that you could have made a better choice. Some would opt for a brand-new Corvette all day every day, while others will always go for a 911 instead.
17 photos

So the following drag race might reveal the quarter-mile (402 meters) capabilities of the three cars involved, but it doesn't necessarily have to convince you that one is better than the other.

Either way, it's still fun to see how the Corvette C8 stacks up against two of its main European rivals: the 911 Carrera and the R8. There are a few similarities here. All three cars have engines mounted behind the driver, they're all RWD, and there's no third pedal in either of them.

The 911 Carrera has the smallest engine of the bunch: a 3.0-liter flat-six. But it also happens to be the only car here that uses forced induction as a means of building up speed. While the Corvette has the largest engine displacement, at 6.2-liters, the Audi R8 has the upper cylinder count as it's a V10.

Given the specs of these cars, it does feel like the R8 is going to come out on top. So the question is, can the 911 Carrera come close to challenging the Corvette C8? The Audi takes the lead right off the bat.

Even though things started fine for the Chevy, the Porsche isn't giving up just yet. It's almost a photo finish, but the naturally-aspirated V8 manages to pull through with a P2 finish. It's impressive to see how good the Corvette is at launching off the line, but Chevy fans will be disappointed to see it falling behind halfway through the race.

On the second attempt, the three cars pass the finish line in the same order they did the first time around. But this time the 911 Carrera is slightly farther behind the pack. For the third run, we also get to see the telemetry results.

The Audi R8 needed 11 seconds flat to cross the finish line. While both the Corvette and the 911 both required 11.8 seconds, the German sports car once again had to settle for third. Here's another word of advice: if you're a Chevy fan, just skip the rolling race part of the race, you're going to get upset. 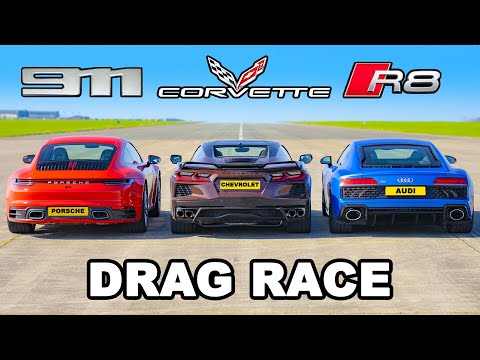