1 Dubai Officially Has the Most Wicked Emergency Service Cars

5 This Hoverbike Takes Us Closer To Future Personal Aircraft
Car video reviews:
Up Next

Cop on Hoversurf Hoverbike Crashes Hard During Testing in Dubai

We’ve declared June Two-Wheeler Month here at autoevolution, but while the Scorpion-3 looks like a bike, it doesn’t have any wheels on it. Instead, it has four spinning blades that take it high up in the air.
12 photos

Hoversurf’s Hoverbike Scorpion-3 is meant to be a flying motorcycle but it’s basically a rideable, human-operated quad-rotor drone. The Dubai police, aka the one police force in the world with the sickest, most awesome rides, has one S3 in tests, with the ultimate goal of being able to send out cops on these things to fight and prevent crime.

The idea is brilliant, if you think about it: justice comes from the sky. In practice, though, despite the fact that the police have had this Hoverbike for at least a couple of years, things aren’t exactly peachy. In fact, here’s a video of a cop crashing hard during a test on the S3 just the other day.

The video was posted online by Hoversurf and includes footage from two different cameras. The explanation for the crash is that a malfunction happened but “all safety systems worked well.” That last part will only strike you as hilarious once you watch the video: if there were any safety systems working during this crash, you can’t really tell, and the only reason that poor cop wasn’t hurt is pure luck.

“The barometer in Dubai refused and an accident occurred – a down from a height of 30 meters [98 feet],” the company says. “All safety systems worked well, and the pilot was not injured. Safety is our main concern. It is thanks to such incidents that our designs are becoming more safe.”

You can see the Hoverbike lean forward some time after takeoff, with the rider able to right it almost immediately. He’s happy with himself – so much so that he does a fist pump. His joy doesn’t last long, because the Hoverbike leans forward once more and crashes on the rear blades, toppling over the rider as the front blades are still spinning. You would imagine one safety system would cut off power to the blades in case of a crash, but no.

On the official Hoversurf website, a note says that the safe flight attitude is of 5 meters (16.4 feet) above the ground, “but the pilot himself can adjust the limit to their comfortability.” The cop clearly felt comfortable going six times higher, and maybe that too played a part in the malfunction.

If this video doesn’t discourage you from riding a flying bike, Hoversurf will sell you an S3 for $150,000. 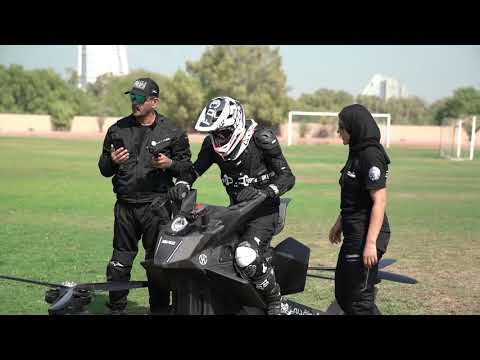