1 Lamborghini Huracan Sterrato Spied Looking Like an All-Road Warrior, Due Later This Year

2 McLaren F1 LM Replica Built From Scratch Is a Handful To Drive, Has All the Power

Most of the time, replicas of exotic machines are laughable. They look nothing like the originals, lack the proper firepower, and will never get a true petrolhead’s heart racing. However, this Lamborghini Gallardo-wannabe is not your usual copycat.
8 photos

First of all, it looks like a Gallardo on steroids. And that’s because it uses the chassis of a Toyota Hilux. Usually, the Thai shop behind this build puts the engines behind the seats, but in this case, the lump still sits at the front, as they didn’t want to mess around with the off-roading capabilities of the Japanese 4x4.

It rides on massive tires, and even though the exterior looks very similar to the Raging Bull's previous-generation V10-powered supercar, and so does the cockpit for that matter, they haven’t sourced anything from the real deal. Thus, almost everything that you see here was built locally. One thing that they haven’t signed is the engine, which came from Lexus, and it has undisclosed output and torque.

According to the video that you’re about to watch at the bottom of this story, the jacked-up Gallardo replica was built at the request of a customer, who passed away in the meantime. Now the shop is looking to sell it, and they are asking 1.5 million baht for the finished vehicle, which equals to around $42,000 at today’s exchange rates. Oh, and it is in right-hand drive, because it does come from Thailand.

Now, if a high-riding Lambo sounds appealing, then you should wait for the Italian company to launch the Huracan Sterrato/JV Stradale (name unconfirmed). It builds on the regular Huracan, has more inches under its belly, and a few visual modifications. Some say that it is based on the STO, and if that is correct, then it might launch with 631 hp and 417 lb-ft (565 Nm), produced by the naturally aspirated 5.2-liter V10. The jacked-up Huracan is due later this year. 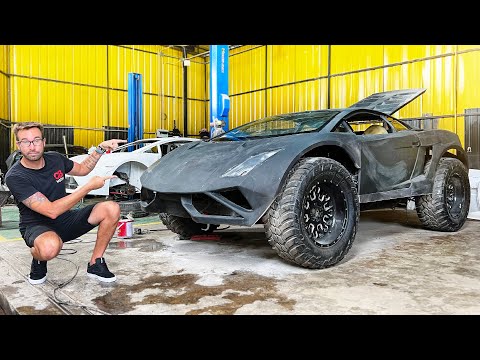