2 Check Out the First $3.5 Million Tecnomar for Lamborghini 63 Motoryacht

Conor McGregor Flies Private Into NYC for the VMAs, Takes a Moment for 9/11

Home > News > Athletes
Elena Gorgan
At 33, Conor McGregor has accomplished great things in his MMA career, spinning many of his wins and heightened media profile into lucrative business deals. At 33, McGregor is worth well over $200 million, so you can bet his lifestyle reflects this.
7 photos

McGregor is one of the many athletes who fly only by private plane. He doesn’t own his own jet, but when he flies private, he usually does it in style – and makes sure everyone knows about it, by posting about it on his social media. Take for example his most recent flight into New York.

The MTV Video Music Awards were held last night in New York, and celebrities came out in droves to attend, present and rejoice at the idea of a proper red carpet ceremony after almost two years of restrictions and only a handful of in-person live events. McGregor was among them: he chartered a private jet and headed into New York to attend the VMAs, where he was also on hosting duties.

Of course, he posted a photo of himself outside the jet, showing that, when it comes to his baller game-face, no one had it down better. He also posted a video from inside the jet, where he and his team (and one flight attendant, who was first told to “give us some space” and was then called back and handed a tumbler of whiskey) held a moment for the victims and heroes of 9/11.

McGregor flew into NYC on the 20th year anniversary of the terrorist attack that changed history, and the fact was not lost on him. So he poured out his branded whiskey, Proper Number Twelve, and like millions of people from around the world, said that “we will not forget.” Hilariously, once he landed into NYC and he made his way to the VMAs, he got himself into a scuffle on the red carpet with Machine Gun Kelly, allegedly over the latter’s refusal to sign a photo for Conor.

The MMA pro did not offer more photos of the jet to allow proper identification of it. In the past, he’s flown private on larger aircraft like an A318 and a variety of Bombardier business aircraft, like the Global 5000 and the Challenger 604. Environmental concerns be damned, when you’re worth $200 million, you need to live your life accordingly. 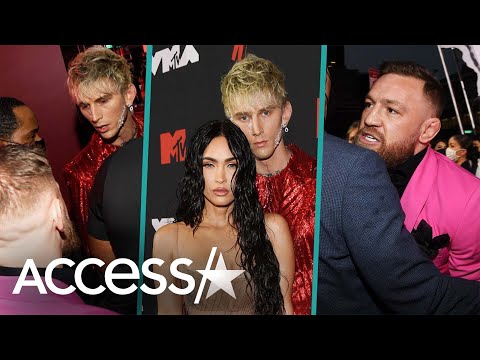