2 Drivers to Be Relegated to Users in Charge in AVs, No Longer Liable in a Crash

4 The Zoox Robotaxi Is Efficient, Fast, Bidirectional and Quite Elegant

Depending on who you ask, the auto industry's future is either bright or incredibly bleak and alienating, as technology takes over and replaces the human operator. Whatever it turns out to be, the future is unpreventable.

Starting from the observation that today’s urban landscape is vehicle-centered, design student Chuan Jiang has imagined a future in which the auto industry will use technology to further human interaction instead of limiting it. Today’s man is in his or her own personal bubble (the ongoing health crisis notwithstanding), mostly due to devices and apps that favor openness to the virtual world, shutting out the real one.

As Mark Zuckerberg once said, “A squirrel dying in front of your house may be more relevant to your interests right now than people dying in Africa.” That's because we’re running everyday reality through the artificial filter of the same gadgets and apps.

The Concept Bubble pod would change that. For all the philosophy behind it, this pod is actually a highly efficient and incredibly convenient means of transportation, both within city limits and outside of it, during long commutes. It would be all-electric and fully self-driving and packed with plenty of technology that would allow users as much interaction with other users as they’d want. Or none at all.

“The street has shifted from a human-centered space to a vehicle-centered space, the street became wider to suit the increasing need of transportation,” Jiang says in the project’s description. “Natural communications that used to happen on the street have been diminished. Can we re-socialize our street and have interaction with others when we are traveling on the road?”

Jiang noticed how soap bubbles bounce off each other when they meet but tend to merge when a medium is placed between them. With these pods, the medium would be man’s need for communication, so they would be able to “bubble up” on the street, allowing for large formations where users would congregate and converse according to common interests.

“[The pod] intends to celebrate a more cohesive society by encouraging people to interact with others on the road and it also provides a possible direction for automotive companies who are changing from automotive manufacturers to mobility service providers,” Jiang says.

Users would summon this pod to their desired location via an app. Inside the cute-looking “bubble,” there’s a cushioned seat that swivels to 360 degrees and allows for a relaxed, semi-reclining position. Users choose how to interact with other pods and whether they want to merge, using either text or video. Face-to-face interaction is also possible, given that the upper half of the pod is made of see-through material and, in some the renders released by Jiang, features openings like the windows on today’s cars.

The idea is an enticing one, to be sure. Long commutes would become less dreary if you could just pass the time with like-minded commuters in one such formation, while the pod did all the driving for you. Solitary rides would no longer be that, and the pods would help liven the routine of the increasingly solitary lifestyles of those living in large cities. Or you could just cut off all communication and speed away whenever you felt uncomfortable, or choose not to engage at all if all you needed was a break (or some sleep).

Perhaps just as importantly, this way of traveling by formation instead of by separate vehicles would help relieve traffic congestion and maximize the use of available space.

Meant to celebrate a “more cohesive society,” the Concept Bubble pod aims to tackle the age-old fear that technology is coming to rob us of our humanity. And it does so by offering plenty of technology as the solution, but assembled in a very cute, user-friendly package, made to serve the human and enhance human communication. A fallacy, if you will, because that’s what Facebook also does. 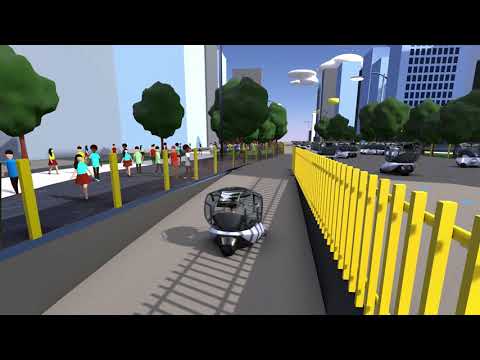