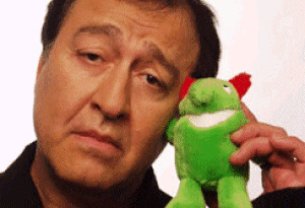 Dom Irrera is a big man – in more ways than one! The legendary comedian isn't known for his slim wait line but recently he found he has other hidden qualities such as honesty. The funny man admitted to drinking and driving after police pulled him over one night in North Hollywood.

The price for honesty, something that many stars in Hollywood have yet to master, is the fact that Dom here won't be doing any hard time behind bars, meaning that more people will get to enjoy his acts.

Dom Irrera might be known to you from the hit movie he starred in back in the day, known as “The Big Lebowski”, that's in case you didn't know where you've seen him before. Well, now that we got reacquainted, let's see what ol' Dom actually got himself into.

In September, he was driving his car to God-knows-where (actually probably heading home) around North Hollywood, when he was pulled over by cops on suspicion that he might have hit the bottle before getting behind the wheel.

There's no report whether Dom was driving erratically or what exactly he managed to do in order to get the po-po's attention, but the fact that remains is that he was indeed drunk. So, the policemen booked him on a DUI and took him to the North Hollywood station where the bail was set to 5,000 dollars.

The “damage” after all that trouble is 3 years probation and the obligation to attend alcohol education classes for a while, not to mention paying $1700 dollars in fines. What do you think, did he get off cheap, or did the funny man deserve to go to the clink?