3 Combat King Tanker Refueling Helicopters Looks Like It's Towing Them

But that doesn’t matter one bit as far as this airplane goes. The Fairchild Republic (now Northrop Grumman) machine was introduced in 1972 not to look pretty, but to be an incredible support tool for the troops on the ground.

Nicknamed Warthog in part because it is as ugly as the namesake animal, the Thunderbolt is a formidable war machine. It can carry 16,000 pounds (7,200 kilograms) of mixed ordnance dangling from its wings and fuselage, including drag and cluster bombs, mine dispensing munitions, missiles, and laser-guided bombs.

The most incredible weapon it packs is however the 30 mm, seven-barrel Gatling gun called Avenger. Making an incredible sound when fired (check video below this text for more on that), it is capable of unleashing rounds in rapid succession from 4,000 feet (1,200 meters), hitting the target and an area of 40 feet (12 meters) around it.

You can clearly see the engines located high up on the rear fuselage in this close-up pic (click main photo to enlarge) showing Warthogs as they retire from an exercise area. Deployed with the 25th Fighter Squadron, they took off from the Eielson Air Force Base in Alaska last week during the local Red Flag-Alaska 21 exercise.

We find the amazing photo just perfect to highlight how beautiful these ugly machines are when seen by friendly forces. 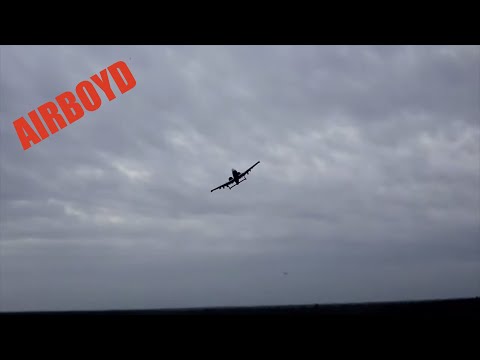