1 New Mercedes-AMG A45 Shows Up on Nurburgring, Goodwood Debut Imminent

3 Mercedes-AMG A35 Drag Races A45, The Result Is Surprising

4 New Kia Forte5 Might Have Hot Version with 1.6 Turbo Engine

Fifth Gear is on a mission to give us the best cheapskate alternatives to cars we want but can't afford. Today, it's all about supermini hot hatchbacks, which have always been popular on the TV show. More specifically, the Fabia RS, Cooper S hatch and Clio RS are offered as 1/4 price rivals to a new Fiesta ST.
2 photos

These being second-hand heroes, reliability is probably just as important as driving fun or the badge that's on the nose. The specifics of which model year and engine you have make a world of difference, as these old cars still aren't bought with beer money.

Let's start with the MINI Cooper S, which is by far the poshest model here. The second generation of this icon is powered by a 1.6-liter turbo engine, which some say is the least reliable of its kind. Besides the warnings Fifth Gear's Vicki gives us about the dual-mass flywheel, we'd say it's worth checking for oil leaks, getting the turbo looked at and maybe the fragile rear suspension as well.

If you can, go for the post-facelift model, not because it's got more power, but because some of the reliability problems were fixed. But what if you want something raw? It's got to be the Clio RS.

Honestly, we don't know why they chose to show an RS Trophy, which is almost a heritage edition rarity. For similar money, you can get the newer Clio RS 197, though we could be here all week talking about potential pitfalls. Just to keep it short, look for perfectly smooth changes into 1st and 2nd while listening out for cold-start rattles.

And finally, we have the least sporty one here, which is the Fabia RS. Though popular in its day, it's not common, as many have been scrapped due to engine problems. The review explains which engine code (it's in the VIN) to look out for. If the owner had any problems with oil consumption and such, it's probably already in the service history. 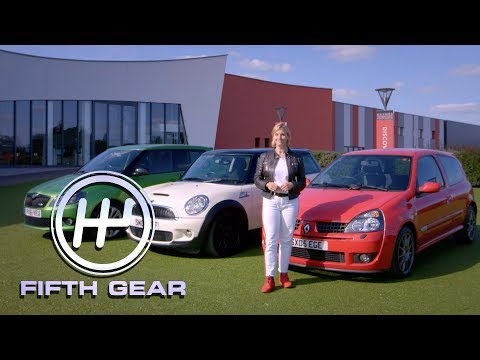