Have you ever gone through a Honda phase in your life? You know, that point in which anything and everything with a VTEC engine under the hood sounds like an excellent idea? Of course, there's nothing wrong with that. But if you're going to choose a Honda with FWD, you should know these have some limitations. Opting for one with RWD is going to be more expensive and less forgiving to drive. But today's race doesn't have an S2000 or an NSX in it.
12 photos

Carlo bought this 1992 Honda Civic CX for $500 back in the day. Sure, this isn't a cheap car anymore, but it still has one major disadvantage for today's event, namely FWD. Instead of K-swapping this hot hatch like most people are doing these days, he opted for a 2.1-liter, stroked B18 inline-four instead.

With the help of 6266 Precision Turbo, this bad boy is now pumping out over 600 horsepower. That's not bad at all, considering it only weighs 2,000 lbs (907 kg). The question is, can it efficiently use all that power? Or is it going to suffer excessive wheelspin going down the line?

At first glance, this race looks like a classic case of David versus Goliath. Going up against a 1978 Porsche 911 isn't going to be easy, even if the two cars seem to be evenly matched. The 911 was built as a tribute to the Targa Florio RSR model, but it uses a more capable twin-turbo, 3.4-liter flat-six instead.

With Motec management, performance figures are now up to about 595 horsepower. But the 911 is about 400 lbs (181 kg) heavier than its opponent. Even so, grip levels should be excellent, given the rear-engine, rear-wheel-drive setup.

There are five people on site, and three of them are willing to bet it all on the Porsche. And we'd like to get in on that bet. Maybe if the Honda had a DCT gearbox inside or had the benefit of AWD, it would have had a chance. But let's watch and see what happens.

Both cars are off to a pretty slow start, and the Civic is in the lead. It's all pretty intense to look at, and we get to witness an almost photo finish. Still, the air-cooled sports car from Germany is the first one to cross the finish line.

While everything feels quite dramatic inside the Honda, the POV camera inside the Porsche reveals a more relaxing scenario. This time, the 911 dominates the battle from start to finish, and it crosses the 1,000 ft (304 meters) stretch of tarmac in what seems to be a blink of an eye.

Hoonigan always runs a best two out of three format, and this means it's all over. Carlo gave it his best shot, but he could not prevail. Even so, we get to see a third bonus run. This time, they've moved to a rolling race format.

Theoretically, the Honda should have the upper hand here, as it is lighter than its opponent. Both cars are up to 40 mph (64 kph) by the time they reach the starting point. While the Civic sounds like a swarm of angry bees, the 911 just keeps pulling ahead. Remember kids, bouncing off the rev limiter is bad for you! 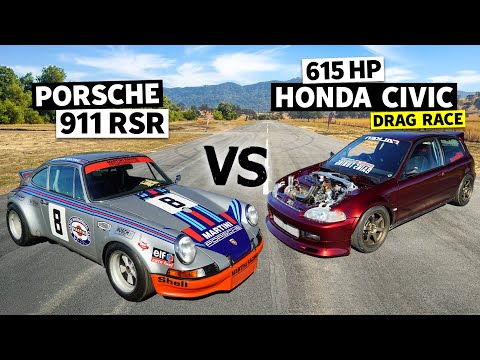