Here’s a $63,000 Military Pink Jeep Wrangler to Put a Smile on Your Face

Builds come in all forms, shapes, and sizes. And sometimes the best adrenaline rush comes in the smallest of packages. Such as a timeless MINI Cooper that was produced during the elegant times of the 20th century and was elevated to 21st century madness courtesy of a powerful Japanese engine swap.
11 photos

The gearhead community has been running rampant with hugely innovative ideas in recent years. We have seen beautiful restomods all over the place. We have seen countless classics restored to levels above factory-standards. And we have seen some truly crazy mods, many of them coming from the engine-swap niche.

But huge SUVs and trucks, and even muscle car swaps seem so yesterday news. Now, if you want to go big, you need to be (very) small. Just a little over three meters long and you can imagine the size of the engine bay. This is what Instagram user Dan – aka vtecturbominiguy – had to deal with during the custom build process of this MINI Cooper.

And we remind you this is of the classic variety, not the slightly larger MINI produced during the BMW era. So, with that out of the way, we can tell you this little blue devil has an Asian ace under its hood. The Honda B18 (1.8-liter) turbocharged VTEC inline-four has nothing on LS V8 engines that usually get dropped into engine bays, but then again none of the latter had to do with a pint-sized space.

Still, the engine swap was somehow completed, and the Civic donor gave not just 169 horsepower. Instead, all the tailored modifications took power to a bomb-sized level of 369 ponies, according to the owner. This is not a sleeper – the MINI Cooper clearly stands out in a crowd thanks to its Precision 5431 turbo or those rad and utterly bespoke split billet alloys from Image Wheels.

The interior is far from stock either, as it has been outfitted with a cool K-Tuned Shifter X and a machined gearknob made by SL Customs. Protection is always necessary – so the rollcage is joined by a pair of Sparco Pro 2000 bucket seats. One thing wpuld have made this custom build close to perfection - switching to rear-wheel drive. Oh, well, you can't have everything in life. 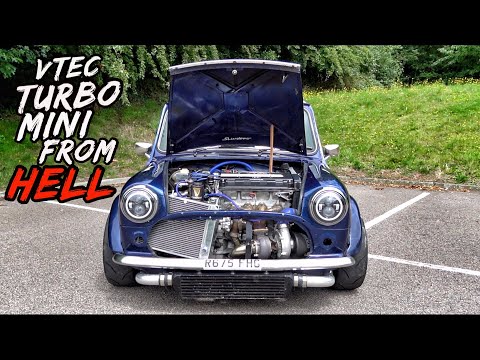