Classic Chevy Silverado Has a Gender Crisis Identity, Pink Interior Says It All

Yo, what is up, guys? Today we have a cool Chevrolet Silverado on big wheels, with a custom interior to show you, but first, don’t forget to hit the like and subscribe buttons, and the bell to make sure that you don’t miss our videos.
11 photos

Sounds familiar? That’s because most videos on YouTube start like this, regardless of the topic. So, we haven’t gone mad, we’re just pointing out that there are tons of different ways to address a subject. Better yet, some background music would be more than enough, especially when the clip is only a couple of minutes long and focuses on the aesthetics like the one shared down below.

But enough ignoring the elephant in the room, which is a third-gen Chevy/GMC C/K, one of the predecessors of the modern-day Silverado. The short-bed truck has a brown paint finish on the outside, shiny chrome trim up front, and big 26-inch wheels, wrapped in thin tires. It also sports a few pink touches, like on the side mirror caps, but those aren’t enough to brace you for the most controversial part of this build, which is the interior.

Pinker than a girl’s purse, it wears the lively shade on basically every touchable surface. Thus, you can see it on the bucket seats with integrated headrests, door cards, custom dashboard panel that features a big screen, steering wheel, whose design mimics those large alloys, headliner and pillars. Controversial looks aside, it can basically rock your world, as it also has a custom audio, with two subwoofers mounted between the seats.

This classic truck with more than a few modern twists probably retains the original firepower, whatever that may be, as the C/K was offered with straight-six, V6, and V8 engines, including a couple of diesels with eight cylinders. Don’t go wash out your eyes now, because you have yet to check out the image gallery and click the play button. 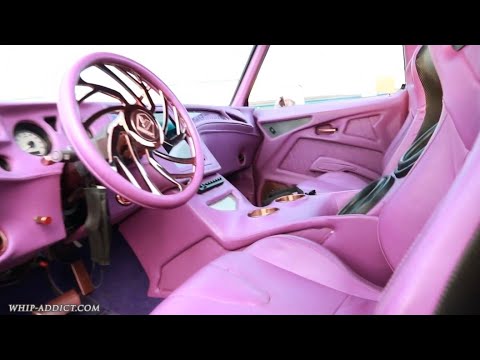