5 The Latest Wipeout Game Is Not About Racing
Car video reviews:
Coverstory

Home > News > Videogames
Cosmin Vasile
Flashout is one of the popular anti-grav series, but if you haven’t played any of the previous titles, you’ll soon be able to pick up the third installment in the franchise. To celebrate the launch of Flashout 3, developer Jujubee announced two very important things.
6 photos

The first one is the upcoming release of the original Flashout 3D game on Steam. The classic anti-grav racer was launched more than 10 years ago, but it was only sold in boxes (on DVD) and via a few online stores in digital form. Also, the game was available on the OUYA, the now dead and forgotten console, as well as on mobile devices.

Secondly, Flashout 3D will not just be released on Steam in its original form, but in a remastered and enhanced edition with upgraded graphics and a couple of new features. More importantly, this will be completely free for anyone who want to play a classic anti-grav racer.

Flashout 3D: Enhanced Edition will be out on Steam on August 31, and you’ll be able to add it to your library for free as soon as it goes live. Of course, this is meant to ramp up the hype around Flashout 3, which is scheduled for release next month.

Fans of the genre will have less than a month to get used to the series before Flashout 3 arrives on September 22. Obviously, the third installment in the series will be much more advanced than the original game, even if it’s been remastered and enhanced.

Flashout 3 will even support VR and motion simulation platforms. For those interested, a demo version of the game featuring one circuit (Star City), one ship and three types of weapons is now available for download on PC (via Steam). The demo also includes a dedicated music track to give fans a taste of what’s to come.

Flashout 3 will be available on PC and all popular consoles, including PlayStation 4, PlayStation 5, Xbox One, Xbox Series X/S, and Nintendo Switch. Only the PC version of the game is set for release on September 22, the console versions will arrive at a later date. 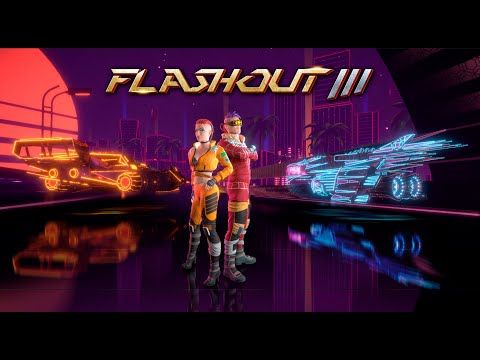